Ghostland (2018) starts hard and fast. By the time it gets to the opening credits, a whole horror movie has gone by in fast forward. It left Jay asking, "Where the hell can this go now?"

Where the hell, indeed. 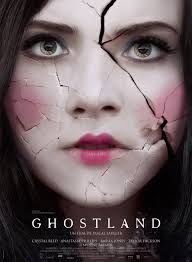 The movie starts with Beth (Emilia Jones) and her sister, Vera (Taylor Hickson), travelling with their mother on their way to a house interhited from a deceased aunt. You know something isn't quite right when a candy van pulls up alongside their car -- then seem to follow them to the convenience store they stop at. Cut to a newspaper reporting a spat of murders and you get a pretty good idea of what's going to happen.

Yup, the creepy pair from the candy van follow the family to their new home, try to kill the mother, then try to abuse the girls. Surprisinlgy, the mother kills the attackers and rescues her daughters.

That's when the movie really starts.

When the action picks up again, Beth (now Crystal Reed) is a successful author of horror stories, is married, and has a child of her own. Seems like everything worked out. Until she gets a frantic call from her sister (now Anastasia Phillips) in the middle of the night, begging her to come home.

We learn that Vera hasn't coped with the trauma as well as Beth. She keeps herself locked in the basement (strangely, in the house where they were attacked as kids) and is prone to self-harm -- or so you think.

You even think, for a moment or two, that the house just might be haunted by the ghosts of the thwarted killers.

But that would be too simple for this movie.


Ghostland takes many twists and turns, back and forth through time, but keeps you engaged through it all. And, just when you think it's a tale of hopelessness, it gives you the happy (well, ish) ending you've been hoping for.

Sisterhood is at the heart of the movie. Vera can't be civil to her horror-obsessed sister when the movie starts but, later, does everything she can to protect Beth from harm. It's also a movie about resilience, and the fight buried deep within us all. Mostly, though, Ghostland is about action.

Throughout most of the film, Beth is paralysed by an inability to act. Considering the world we live in, I think we can all understand that. If I stand up, will I be singled out? If I fight back, will I make it worse for myself? Well, if Ghostland is anything to go by... maybe. But, if you're willing to try, you might just find your freedom.

Ghostland is classified as a horror and I can see why; it is a classic home invasion story. But it's not that spooky. There was one big scare, though, and if you're a big scaredy cat (like me) you might want to look away when that creepy mirror swings open. *shudder*

If you've seen Ghostland and you want to chat about it, get it touch. If you want to recommend a film to review, drop a comment below and we'll have a look at it.
Posted by Wondra at 19:59