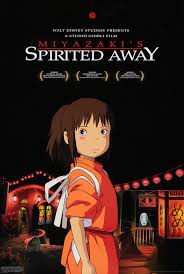 Until a recent trip to America (RIP America), I was adamant that I hated anime/manga because... well... hell, I don't know. I guess it was because I didn't know anything about it, it wasn't familiar, and there was that pesky language barrier.

A few years ago, I spent an afternoon with a friend's boyfriend (well, they're both exes now but for totally unrelated reasons) and he made me watch Hellsing. I did not expect to like it. Boy, was I surprised. Sure, I grumbled about it a good deal but, secretly, I was fascinated.

Then, I caught Vampire Knight on Netflix and it freaking broke me. I was hooked. Death Note, Black Butler, Ghost in the Shell, Castlevania, etc. etc. Even though I fell for anime/manga several years ago, I still hadn't seen anything by Studio Ghibli.

Not enough vampires, I guess.

So, when I was making my list of 100 Classic Must-See Movies (That I've Somehow Never Seen), I decided it was time to fix that. I put both Spirited Away (2001) and My Neighbor Totoro (1988) on it. How did I pick which one to start with?

I'm actually a little worried about watching My Neighbor Totoro now because how can it possibly be as good as Spirited Away?! It was just... magical. 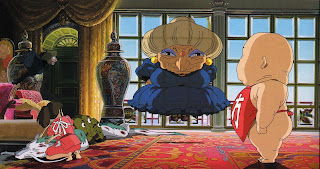 Seriously. I almost died from OMGTHATISTOOFREAKINGCUTEICAN'TEVEN.

Okay, quick recap for anyone who, like I was a few days ago, is somehow enduring life without the magic of Spirited Away in it:

Chihiro is a ten-year-old girl who's pissed off about her parents moving her away from her school. Her parents, in true anime form, are detached and mostly annoyed by her existence. On the way to their new home, Chihiro's family come across what appears to be an abandoned amusement park but is really a kind of door to the spirit world, where Chihiro becomes stuck after her parents pig out on food intended for the spirits and are turned into... well, pigs.

Trapped in the spirit world, Chihiro is befriended by the sometimes boy/sometimes dragon, Haku. Chihiro is forced to work at a bath house run by the powerful and terrifying Yubaba until she finds a way to break the spell on her parents and earn her freedom. There are tests to pass and friends to be made along the way, but Chihiro eventually frees her family and they all go on their merry way.

The artwork feels a little more Westernized than some I've seen but it's smooth and colourful -- a real treat for the eyes. The music is truly ethereal. It's powerful and soothing at the same time. Spirited Away gave me some big time feels.

I love all the spirits, monsters, gods, and demons. Some of the creatures are truly bizzare, like the Ushioni ("cow goblins") and some are just plain creepy. If Jim Henson had done crack, he might have come close to the weirdness of the creatures in Spirited Away.

My favourite, of course, is No Face. The way he goes from all sweet and gee-let-me-help you to eating everything and everyone in sight... totally my spirit animal! (The sootballs come a close second, though, because aww!) 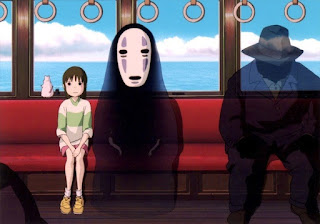 Chihiro is the kind of hero little girls need. She's the only one around (besides Haku, of course) who is't greedy. She's brave and strong. Chihiro tries to help everyone -- even the people who've wrong her. When her parents begin to feast, she's the one who tells them it's wrong. She has strong morals. Hell, she's the hero we all need.

My favourite moment in the movie is when a stink spirit enters the bath house and Chihiro gets stuck serving him. She realizes that something is wrong and starts to pull at the thorn in his side. It takes every employee of the bath house to pull the thorn free. Eventually, they pull out a whole wad of nastiness to reveal the river spirit inside.

It's a beautiful metaphor and an important lesson. You know what happens when you pollute your rivers? You get big, nasty stink spirits. But, it only takes one person to inspire a whole community to do something about it. If everyone works together, they can turn a nasty stink spirit into a beautiful river spirit.

Everything about Spirited Away is perfect. I absolutely adore it and I'm excited to watch My Neighbor Totoro next. I don't know what other surprises Studio Ghibli has in store for me, but I'm sure I won't be stopping there.
Posted by Wondra at 00:03