Hello again and welcome to the 31 Days of Modern Horror Halloween special here on Wondra's World. Today is Day 15 and we're going to be re-visiting one of Jay's favourites, 28 Days Later (2002). 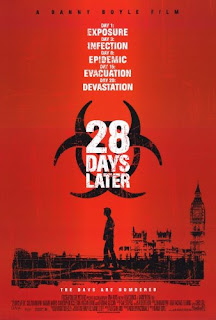 28 Days Later is a hard one to categorize because it's obviously a zombie film, right? Except... of course it's not. Do you consider 28 Days Later a zombie flick?

"If I had to make a list of top zombie films, I'd put 28 Days Later on that list but it's not really a zombie film. They're not zombies; they're diseased. It's an outbreak film.

"The thing that makes it work so well is that it's so believable in this day and age. Do-gooders let a disease out because they're too ignorant to listen. It's frightening because you know someone out there has the technology. Can you reanimate corpses? No. Can you create a super strain of rabies? Well... Think about it. What was SARS? A test, I think. One minute it's running rampant, the next, it's never heard of again. There's got to be more like that out there. "

Zombie movie or not, 28 Days Later is an unique, intense, psychological horror film that should be on everyone's cinematic build-up to Halloween. I find a lot of the movie's... charm(?) comes from the fact that it's British. I've said it before: British horror is a completely different animal, one that too often gets underestimated until it, you know, eats one of the patrons.

28 Days Later is dark and brooding. It drags in places but, in the places that happens, it's entirely intentional - like pulling against the current to keep things from getting away from you too quickly. Because the rage-driven "zombies" are so fast and there's so much running for your life, you need the rest of the movie to slow it down a bit to keep from getting too exhausting.

The outbreak that runs rampage through Britain in 28 Days Later comes as a result of well-meaning animal rights activists. Now, there's a difficult one to discuss. Were they right or wrong? I understand why they did what they did but I also know the dangers of releasing animals. Is testing on animals wrong? Abso-freaking-lutely. Is busting into a lab and releasing said animals en masse the right way to handle it? No way. 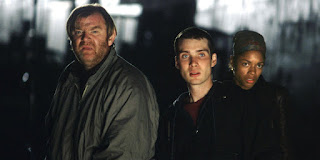 Rage. You don't need re-animated corpses when you can take the very worst of humanity and amp it up by a thousand. That disease... we carry it around inside us all and really - like Frank's (Brendan Gleeson) unfortunate demise - takes almost nothing at all to send us over the edge. Sometimes, all it takes is a single drop of blood.

"What a shit way to die. He's such a manic, fun character. All he wants to do is take care of his daughter but starts to lose hope when they find the barricade empty.

"You know... I had to wonder why the military didn't show up sooner. They were making enough of a racket. Why wait util after Fank dies? The more I thought about it though, the more sense it made. It's bad enough they've got Jim but he's young and at least he's another body to help get shit done. Frank, on the other hand...

"Well, it's obvious he's attached to Hannah and, if you've got designs on the girl, you're not going to want her dad around. It's a horrible thought - but one that's too real for comfort."

If we're talking about the worst of human nature, we have to spend some time talking about the soldiers. Before shit even really kicks off at the make-shift army base, you can tell exactly what type of people you're dealing with because they happily confiscate Jim (Cillian Murphy), Selena (Naomie Harris), and Hannah's (Megan Burns) goods. Frustratingly - but not unexpectedly - that word seems to apply to the girls as well, where the soldiers are concerned.

After fending off a potential attack by blowing a bunch of shit up, they come back hopped up on testosterone and ready to take the "goods" by force. That's when you realize, as you often do in zombie movies, that we're the real monsters.

"I know you think it' all about Christopher Eccleston's Major Henry West keeping power but I don't think that's it. He just wanted to keep things together. The thing he promises wasn't his to give but he does it to give his soldiers hope. It's what forms the basis of the end of the movie. You realize these soldiers that are supposed to be bad asses aren't, not at all.

"With movies like this, you can find yourself rooting for the army but not in this one. They have no redeeming qualities. You want them to get fucked up." 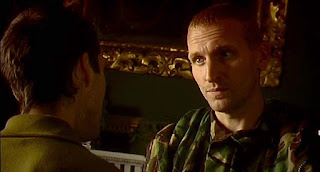 Selena is a powerful but inconsistent character. When Jim first meets her, you think 'What a bad ass'. She knows how to survive and she intends to do it whether anyone else around her does or not. You see how strong she is as they're climbing up several flights of stairs and she has to stop to check on Jim, who's struggling to make it. The fact that she's tough as nails makes the scene where the soldiers want her and Hannah to dress up pretty even more frustrating.

I really struggle with that scene. Drugging Hannah was a chicken shit move. Selena is a fighter; we've seen it in her every step of the way. So, why does she just accept her and Hannah's fate there? Why doesn't she find a way to fight back? If she wanted to truly save Hannah, she could have even overdosed her. (I'm not saying that's what she should have done, only that it was an option.) It seems inconsistent with her character for her to think, 'Well, we've gotta do it so just make it as easy as possible.' The Selena that whacked her friend to bits at the beginning wouldn't have taken it.

That slip in Selena's character isn't the only flaw in 28 Days Later. One thing you can't help but notice in an apocalyptic film is how little chaos there really is. The streets and roads are clear of rubbish. There are no burnt out or broken down cars clogging things up. There are almost no rotting corpses or body parts littering the place. It's not very realistic.

"You can pick out a lot of flaws in the film. The absence of bodies, for instance. In a city that big, they'd be everywhere. And the lack of cars. Why aren't there crashed, burned out, empty cars? Where's the garbage? Where are the scavengers? It's too clean.

It's still a good movie, though. It's flawed but there's no such thing as a perfect movie. Even the greatest movies of all time are flawed, this is no exception."

Still, Cillian Murphy can barely keep his clothes on so, you know, give and take. 😉

If you didn't know, they filmed two endings to 28 Days Later. In the one you see most often, Selena saves Jim and a plane finds them. In the other, Jim doesn't make it. I'm a big ole sap so you know which ending I prefer. Bet you can guess which one Jay likes better, too...

"I prefer the one where Jim dies. Simply because it's more believable. They're in the back end of nowhere. Chances are he wouldn't survive something like that. Selena's not a doctor, after all, she's just a pharmacist. No, no happy ending for this lot."

Thanks very much for stopping by today. I hope you'll come back tomorrow for another Halloween horror treat. Until then, you know where to find me if you want to talk zombie movies...