31 Days of Modern Horror: The Cabin in the Woods

It's pretty much  given that anything with Joss Whedon's name attached is going to be pure, freaking gold. You can also be sure it's going to be funny. That being said, I give you... 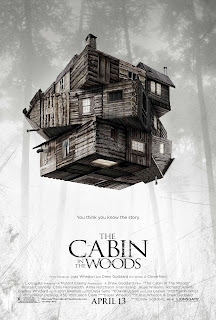 "It's quite an interesting, clever movie. It's entertaining, it's intense, and it's gory as well.

"I love the way it's just a big joke to the people doing the sacrificing. They're so nonchalant about people's lives. They're sacrificing these kids and they don't mean anything to them. they're all betting on which monster will get them because it's so realistic. Honestly? I think we'd all put our money down.

"Like so many on our list, it's unique. There's nothing else like The Cabin in the Woods. When I picked it up the first time, I was expecting something like Evil Dead or Cabin Fever. The first time you know there's something different is when you see the force field and think 'Okay, you've got my attention.'"

For Day 11 of our 31 Days of Modern Horror Halloween special, we wanted to lighten the mood a little with some comedy horror and, really, who else do you go to for that but Joss? Whedon did't direct this one but he wrote it, which is obvious every step of the way.

"You can tell it's a Joss Whedon movie. It's all in the dialogue. Years ago, they raved about Tarantino's dialogue but Joss surpassed him by miles. His writing has a very real, very natural way of talking. The characters he created are all very realistic.

"Take it back to Buffy... (Not the film, it was crap.) The series was avid viewing. I didn't want to watch that. Just say the name out loud. But I watched it and I loved it. I was older than the characters but it was still relateable. I love Joss's fuck-you attitude with Fox. That impresses me.

"You can see his style in The Avengers, too. It's got that dialogue, that humour. He's a hardworking director with a knack for hooking viewers. He's got such a natural way of writing - but you have to give the actors credit, too, for being able to pull it off. You can have the best dialogue in the world but if you've got a crap actor, it'll never work. It has to be natural. "

Joss excels at taking stereotypes, expected norms, and turning them on their heads - just look at Buffy. Who would have expected The Chosen One to be a blonde bimbo who'd rather wave pompoms than wield a stake? No one. That's why Joss does it. The Cabin in the Woods is the same.

The Cabin in the Woods utilizes well-established horror tropes but never pretends not to be a comedy. Yes, you've got the creepy gas station attendant and the cabin full of drunk college kids - but if you tried to watch this one as a straight horror, you'd be disappointed. Hell, if you watched The Cabin in the Woods without laughing at each death, I'm a little worried about you.

"All the best horror has some element of horror in it. It has to. If it's just blood and guts and terror, it's too heavy to enjoy. The comedy keeps it from getting too dark to be entertaining."

I love the idea that the cabin isn't really the setting; it's really a tool. Everything there is designed to encourage them to make choices. Sacrifices who choose their own demise... genius.

"The whole... program? Premise. It's unorthodox. The Cabin in the Woods is an impossible story made believable by making it so... what you would do. There are screw ups, bets, awkward conversations, and inside jokes. It's just normal stuff."

The basement is full of creepy objects, everything from tarot cards to comic books, and each one has the potential to summon a different monster. What would you pick?

"I'd end up going for the fortune telling machine so... clowns. Yeah. Actually, I think I'd be okay with that because I'm not afraid of clowns."

Of all the monsters locked away in the underground facility, I think my favourite had to be the unicorn - a strange choice for me, I know, but it was just so wrong! Unicorns aren't supposed to be the baddies! They're supposed to be all cute and ethereal and magical. Not, uh, stabby.

Impaled by unicorn. That's one you don't want on your death certificate.

You know... if there's enough of human civilization left after the Ancients rise to assume there are death certificates.

Don't know about you, but I get the feeling there isn't.

"I'm gonna go with giant cobra on this one. He's just there, cleaning up the leftovers..."

For me, the best scenes in the movie all take place in that underground facility. Most of the action there is just so inane. It's really just this boring office. Not so different from any others except their bosses really are evil. (I'm going to assume these massive deities they serve are evil. Good ones probably wouldn't expect a sacrifice? ...right?) It amuses me that they're taking bets on which monster will be summoned because that's exactly what working in an office is like. You have to have something to break the tedium. Or, in their cases, the horror.

"I love the bit just after Holden (Jesse Williams) tells Dana about the two-way mirror and they trade rooms. He's been all gentlemanly but she has a little peep when he goes to undress. It amuses me."

One of the other moments I love comes after Marty (Fran Kranz) and Dana (Kristen Connolly) unleash the nightmares. There's this moment of stillness before the elevator doors ping and the corridor explodes. You have to watch it a few times just to take in all the craziness happening there. And, well, for the LOLs because it's hilarious.

By the way, Marty is my favourite character. He's hilarious. From his massive extendable coffee cup bong to his deep revelations, he steals every scene he's in. Plus, it's nice to see the stoner make it past the first couple of killings.

"I love that the stoner survives and keeps on surviving. That's their mistake, of course, because they messed with his weed. He's my favourite character because he's got all the best lines."

I've already spoken about the ending a little but I want to go back to the intro for a minute. Were you paying attention? There's great foreshadowing going on there, even though you'd probably only appreciate it after watching the movie a second time.

I strongly suggest watching The Cabin in the Woods at least twice because it's one of those movies that you take something different away from with each viewing. Every time you re-watch this one, you'll notice things you never noticed before. 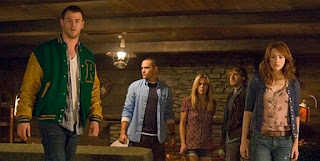 The cast shows Whedon's loyalty to certain actors, like Amy Acker (Lin) and Tom Lenk (Ronald). Chris Hemsworth (Curt), of course, is a great addition and Sigourney Weaver as The Director is a geeky must-have cameo.

"Can you believe that's Thor?! Just look how tiny he is!

At the time, it was a cast of (more or less) unknowns, except for the big reveal at the end. I didn't even know anything about Chris Hemsworth at the time. Seriously, though, tiny!

Joss Whedon often stayed loyal to the same actors and you can see it in The Cabin in the Woods. All directors do it, of course. Hitchcock, Carpenter, Coppola, Tarantino, Cameron. You work with who you know. Like everyone else, directors get comfortable working with certain actors. "

I appreciate the ending in so many ways. One, I'm not going to sit here and pretend humans are the worst thing to ever happen to this planet. Heavy, I know. (You should have dinner with me sometime. I'm a DELIGHTFUL conversationalist.) Secondly, they went BIG. There's no way that shit's turning around. What does that mean? It means no sequels, which is a pretty bold choice, given it's a horror. most horror movies leave some sort of opening for the franchise to grow, even if they don't use it. That's never really been Joss's style. (Just see the end of Angel.)

"The ending is so frustrating! Where it ends... I want more! I want to see the end of the world! Dammit, Joss, stop cutting away!

"Would I kill my friend or let the Old Ones rise? ...I'm gonna say kill my friend. At least I'd have some kind of chance at living."

That's it for us today but be sure to check back tomorrow for our next modern horror film.