31 Days of Modern Horror: The Cottage

Welcome back to Wondra's World and Day 5 of our 31 Days of Modern Horror Halloween special. Today's movie is... Hell, I don't know what to say about The Cottage (2008). This is a weird'un. 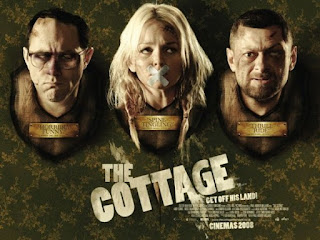 "It's one of those films that are so mad they're jaw-dropping. You have no idea what the film is going to throw at you next. It starts with two brothers arriving at a cottage and it gives you no idea what's coming. For the first half of the film, it's a botched kidnapping then, out of nowhere, you're watching an out-and-out horror."

I think that's a pretty fair assessment. The first time Jay convinced me to watch The Cottage, I wasn't all that interested for the first few minutes. It's really not much of anything at the beginning, just a couple of guys sitting around a kitchen. So... mundane. Then you see the body in the trunk.

Don't worry, though, she's not dead.

"The Cottage does have a pretty hokey intro. The opening titles are very retro. And the music!  Laura Rossi's score is a real love letter to Beetlejuice. It sets the tone for a movie that's going to be both creepy and fun - which The Cottage definitely is.

"The casting for this one is brilliant. Andy Serkis (David) is a tremendous actor who only gets about half the recognition he deserves so to see him in a weird little British film like The Cottage is a real treat. (If only they'd cast him alongside Sean Pertwee as brothers, that'd be the ultimate.) Add Brookside's Jennifer Ellison (Tracey) and Bottom's Steven O'Donnell (Andrew) to the mix and you've got something that was always going to be a little left of centre."

British horror can be so hit or miss. The ones that nail it do so in a big way but the ones that strike out do so even bigger. The Cottage is the former. I love British horror because of the interesting settings British houses supply. They're crowded, narrow, draughty, and tend to be all odd angles and nooks. The Cottage is no exception. Things get even weirder when the main cast make their way to the farmhouse and the weirdness gets turned up a notch.

As far as characters go, I think we both agreed that Tracey was the best of the lot. I love that she's totally an unrepentant bad ass who doesn't mind dropping a few "f" or "c" bombs to get her point across. She's not your typical victim and I don't think she's meant to be likeable - but she is. You know something is going to be different when Tracey opens her eyes and headbutts Peter.

"Tracey is my favourite character because she is just as hard as nails. For such a beautiful-looking girl she's the most foul-mouthed person you'll ever see - and violent to boot. She doesn't mess around. I'm rooting for her the whole time."

"Peter is insufferable and Andrew is worse than useless but you have to feel sorry for David. Nothing goes his way. It's supposed to be his moment of triumph - but, because Andrew is so stupid, they've got nothing. Plus, his brother might be one of the most annoying people alive. 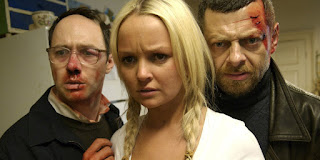 You do wonder exactly who you're supposed to be rooting for when it starts. Poor David. You can almost taste his exasperation every time Peter and Andrew fuck his life up just a little bit more. By the end, you just really want that particular dog to get his bone.

For a long time, The Cottage is the funny story of a kidnapping gone terribly wrong. The horror doesn't come into it straight away. Even when it does, it's overlooked. The Cottage is as much about what you don't see as what you do. People are walking by dead bodies and hands in freezer, all wrapped up in their own shit.

From a gangster film to straight up horror, The Cottage never loses the comedic element. Comedy comes from random places sometimes - like Peter's fear of moths. (But, hey, I'm afraid of zombie cows so who am I to judge?) At one point they even go for the classic rake in the face gag which, somehow, still works after all this time.

Even the gore is humorous, in that Evil Dead 2 kind of way. When David picks up his brother's partially-severed shoe and the (socked) half-foot slides out, it should be a horrific moment but is far too funny not to laugh at. Don't get me wrong, though, there are some good jumps too and plenty of red herrings to keep you guessing.

"The Cottage is a massively overlooked film. Because there's a comedic element, people don't take it seriously. Because it's British, it doesn't get the attention it deserves. I loved every minute of it."

There's not really much else that can be said about this one. You've absolutely got to watch The Cottage for yourself, if you haven't already. Stick with it through its slow beginning and the handful of pointless fat jokes they throw in (boo). It's worth it, I promise.