The title for today's post should be "Underworld: Bringing Sexy Back Since 2003".

Welcome back to Wondra's World and thanks for checking out our 31 Days of Modern Horror Halloween special. Today is day 14 and we're going to be taking a look at Underworld (2003). 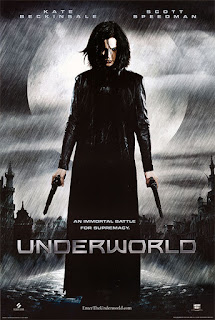 Okay, but, really. If you were a teenage goth (or, you know, crushed on teenage goths) around the 2000s, this movie's for you. It's got that pseudo-Victorian look that goth metal bands rocked so hard at the time and I freaking love it. The costumes are all leather, lace, and shiny buckles all side-by-side. We're talking corsets and long, sweeping, leather jackets.

Before I get too distracted by the aesthetic, we'd probably better move on to the rest of the movie.

"This is my favourite of the Underworld movies. The others were good but this was definitely superior. They're all very stylish, action-packed films. What's not to like?"

Underworld starts with a bang. It throws you right into the middle of the action and doesn't let up. This is definitely an action movie that uses horror tropes. Even though it's about an epic and seemingly endless battle between werewolves and vampires, they'll all shooting the crap out of each other instead of relying on their natural weapons. (Seriously, the only people who got hotter from watching this than teenage goths were NRA members. We're talking a lot of guns.)

"This is an action movie with horror elements. It makes the list because vampires and werewolves are classic horror characters.

"It helps that the vampires didn't sparkle..."

There's an interesting mix of old world charm alongside modern technology, giving Underworld hints of film noir. The only other time I've seen that combination done so well is in the Batman franchise. It makes the movie timeless but it also makes a lot of sense because, if you were a vampire, you'd collect ages, wouldn't you?

(But, hey, I'm a bit of a hoarder and I don't think being a vampire would change that so maybe it's just me. Lol.)

"It's beautifully shot and very stylistic with the filters that were used. It's a blueish filter and they've made the film almost timeless. You don't know when or where it's set. It doesn't give you enough information to place it in any particular time or place."

If you haven't seen Underworld because it's *just* a vampire movie (or, just a werewolf movie), you need to get over yourself and just watch it already. This not your typical vampire movie. It's so much more interesting than that. The feud between the vampires and the werewolves is personal; it has nothing to do with wanting dominance over humans and everything to do with old wounds. In fact, humans hardly play any part in the movie at all, except as maybe background noise.

"It's a cool concept. Vampires vs werewolves? It's like Daleks versus Cybermen: a faboy's wet dream.

"The vampires are cool. It's a good take on the vampire myth. They're decadent.

"The werewolves? Well, I have seen better but they're still good."

The werewolves' transformations are well-done and believable, in the mould of An American Werewolf in London. On the other side, you've got the vampires and their fangs are exactly right. Those two things will make or break a werewolf/vampire film so it was vital that Underworld nailed them, which they did.

There's also just enough romance for the warm fuzzies without making you want to gag. Don't expect any outlandish declarations of love from this one, you'll be disappointed. All the romance is conveyed through subtle looks and touches, which can sometimes be more powerful than any words.

Kate Beckinsale's Selene is a kick-ass female hero we need to see more often. She's all business and logic and doesn't take any shit from anyone. (I actually cheered when she punched Shane Brolly's Kraven in the throat.) When Kraven and his little lapdog (Sophia Myles's Erika ) want Selene to dress up for a party, she blows them off spectacularly because, dammit, she wants answers. Selene is one of their best fighters. She never cowers and, even when you can tell she's overwhelmed, controls her emotions long enough to get the job done.

And let's not forget the hero landings and Matrix coat swings.

"Kate Beckinsale has always been a good actor. She seems to be one of those actors who gets better with age and she brings a sexy coldness to the role of Selene."

One of the things I liked best about Underworld was the way they presented backstory. As an author, I can tell you backstory is a bitch to get right. Too early, you slow down the story. Too late and you confuse the audience. Underworld gets around both issues by providing snippets of backstory in the form of visions that help you piece things together at just the right pace. When the full story is revealed, you find yourself questioning your allegiance.

"Lucian (Michael Sheen) was a cool character with an interesting backstory but Selene was fucking cool, too. And Viktor is an absolute git but Bill Nighy plays it so well....

Underworld has an awesome soundtrack. Its slick action scenes and grand set designs show the money that was put into it. There are more beefy men in leather than you can shake a stake at. I really can't think of any reason not to watch this movie. If you disagree, you know what to do. We'll be back tomorrow for another Halloween treat.