Welcome to Wondra's World and our 31 Days of Horror Halloween special feature. Today, we're going to be talking about the 2004 Stephen Sommers film, Van Helsing. 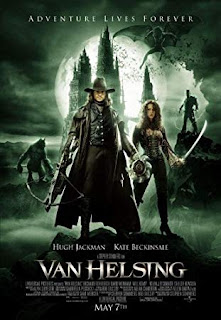 Van Helsing is a homage to the Universal monster movies of the Twenties and Thirties. I love the fact that Van Helsing, from the same studio, pays loving tribute to those classics in such a fun, inventive way. You've got to go into it expecting a steampunk infused action-fest and little to no (let's say no) historical accuracy to really appreciate it.

"Historical accuracy was sacrificed for the story line, which is fine because, ultimately, it works.

"Van Helsing is a good, fun film. You don't need to think too hard about it. Anything with Dracula, Wolfman, and Frankenstein in it can't be bad. Van Helsing was always my favourite character, you know."

I couldn't believe how little Hugh Jackman looked as Van Helsing. I'm so used to seeing him as Wolverine that he seemed tiny in this role. David Wenham as Carl, the tinkering friar, stole the show for me. He was hysterical in every scene he appeared in.

"Carl had some of the best lines and brilliant delivery. David Wenham is just fun, anyway.

"I was happy to see Alun Armstrong in Van Helsing. He isn't the best looking bloke in the world but he's one hell of an actor. What I mean is, he'll never be the leading man but any movie is better for having him in it."

"It's definitely a totally different take on Dracula. (He was kind of a mix between the Oldman and Lee Draculas, wasn't he?) You needed the CGI to really make it work. But, honestly, the CGI was a bit ropy. It's okay, though, because it was just fun." 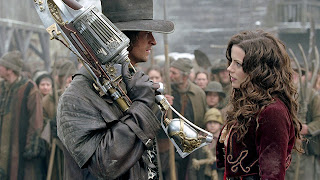 "Van Helsing is a big budget blockbuster with a big cast. It was always meant to be one of the big boys. Universal plowed a lot of money and work into it. The style is crisp. You see everything that's going on. I liked the direction it took. I thought it was beautifully filmed. It's not quite Tim Burton but it's not far off."

It has a very definite style, doesn't it? You see that blue-grey filter being used again. It's a look that's become synonymous with horror over the last decade. Other than that, there isn't a lot about Van Helsing that's expected. They did a good job of keeping it offbeat and original.

"This was definitely a different kind of story. It was good and fun to watch but it also brought the old stories up to date - whilst keeping the story in the past. Inventive.

"It's like Frankenstein. Frankenstein's been done to death so something a bit different stands out. There's not a lot you can do with that one. Once you've got the story, you can't go that far with it. It's not open-ended, which doesn't give it a lot of scope and can make it difficult to make an original movie featuring Frankenstein and his monster. I think Van Helsing does very well. "

But I think Robbie Coltrane's Mr. Hyde is the best imagining of all. He was just cool.

The other thing you have to remember when watching this one is that Van Helsing isn't hardcore horror. It utilizes horror tropes and feels like a horror movie but it's entertaining, not frightening. 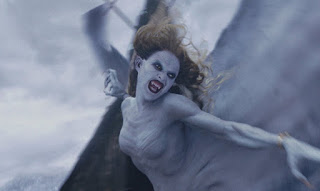 "It's horror lite, really. There are a few jumps but mostly laughs and fun. Van Helsing doesn't want to frightening you; it just wants to entertain you, which it does. There are a million little errors in the film, sure, but,for escapism, it's perfect.

"Van Helsing is a rip-roaring story that doesn't waste time with unnecessary dialogue. It just gets into it. Like dominoes, it sets 'em up and knocks 'em down quickly."

Yes, it's definitely an action film with horror elements, rather than an action-packed horror film.

I wanted Van Helsing on this list because of its relation to the classics that inspired it. Why did you want to see it here?

"We needed a big budget movie. This is it.

"You know, I don't know why they didn't do a sequel to this... I thought it had done quite well in the box office? Maybe it didn't do as well as they'd hoped, I'm not sure. Or.... maybe it was because they killed off all the good monsters."

Yeah, kind of hard to make a sequel when all your characters are dead. I think it works perfectly as a one-off, though. If they tried to recapture the cheeky magic of Van Helsing, it would just come across as a lame imitation.

The thing that got me was the ending. I still can't believe they actually did that to Kate Beckinsale's Anna Valerious. I kept expecting them to bring her back, even after the credits started. I felt so cheated.

"I didn't expect them to kill off Anna, either, the first time I watched it. Ballsy move. Mind you, it was the right thing for the story - and, you know me. I always love a horror film when it take me where I don't expect it."

I think it's safe to say Van Helsing is totally unexpected. Honestly? I did't expect to enjoy it, with the historical inaccuracies and all, but I came to love it. What do you think of Van Helsing? Get in touch and let us know!
Posted by Wondra at 10:39