The Selection (Sapient Salvation #1) by Jayne Faith is the first book to surprise me this year. I won't lie... when I downloaded it, I fully expected it to be a half-assed rip-off of Kiera Cass's The Selection. While there are similarities (even the covers have similar feels), Jayne Faith's The Selection is a darker, more enjoyable read (with less sniveling.) 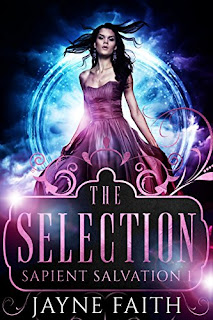 The story follows Maya who, like the other occupants of Earthenfell, labors to serve her alien overlords. The overlords protect Earthenfell from the constant barrage of attacks from other aliens who want to claim the planet in exchange for a tiny sacrifice: twice a year, sixteen young people are chosen to compete for the chance to serve the Callistan, Lord Toric. The sacrifices can be either male or female, with the winners from each sex becoming Lord Toric's servant or concubine, respectively.

And the losers? You do not want to be a loser...

Maya and Lord Toric have an instant connection, despite the fact that he's not allowed to marry her and she was a last minute sacrifice for her clan when the sacrifice they had trained died unexpectedly on Selection Day.

The story switches from Maya's point-of-view to Lord Toric's every few chapters which, because it's written in 1st person, can be a little awkward. Things get really interesting the first time we get a peek inside Lord Toric's mind because we learn that he has some... unusual sexual preferences.

Wait. Aliens, a life-or-death competition, and a little kink?

The thing that sets The Selection apart is its maturity. Although Maya is (groan) a virgin, she's not completely sexually inexperienced, and doesn't moon over the guy who screwed her over (by, well, screwing everyone else.) She just gets on with things, which makes her an extremely likeable character.

Lord Toric's borther, Sir Jeric, is manipulative while his brother's lover (and person in charge of the competition), Akantha, is straight-up spiteful. It's pretty obvious where their hatred comes from but I'm a little worried that it might be a little over-the-top as the series goes on. We'll have to see. Because, yes, I went in search of the second book straight away - something I rarely do. It usually bothers me when there are so many books in a series but this time, at least, I'm glad there's more.

The Selection is a sexy, smart, engaging, sci-fi dystopia that's absolutely worth a read for fans of YA and NA literature. It's free on Amazon Kindle, too, so there's no reason not to give it a try right now!
Posted by Wondra at 11:10