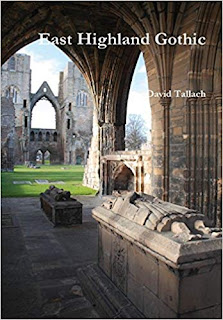 East Highland Gothic by David Tallach is an example of the old adage, don’t judge a book by its cover. I very nearly passed this one by because the cover was so bad (plain green, with yellow text.) I’m glad I didn’t. East Highland Gothic is a work of melancholy brilliance that deserves a much better front door than it has. Let’s face it, if we didn’t judge books by their covers, we wouldn’t have to dish out the big bucks for the best ones.

The collected poems in East Highland Gothic are all about image. They’re so vividly written you can all but see them playing out before your eyes as you read. They’re stark, gloomy, and often haunting. East Highland Gothic is so evocative of darker, gloomier times that it would make a perfect read for those late autumn nights.

This collection doesn’t just belong in a different season; it belongs in a different time altogether. The poems in East Highland Gothic could be straight out of Victorian England, being read by the haze of a gaslight. Tallach captures the essence of history so well, his poems feel as ancient as the things, places, and people they describe. The poet is truly an old soul.

East Highland Gothic is the perfect length to lose yourself in and is organised into two logical sections: land and sea. It’s dreary and morose in the best possible way, written by someone who clearly feels the import of history. I can’t recommend it enough.
Posted by Wondra at 11:34