I can see how this book of poetry might appeal to a certain group of men but it doesn't do anything for me. Nothing in Lazy Prey inspired or touched me. The only poem that even stood out was "A Grateful Goodbye", which was so shocking it earned a knee-jerk laugh. 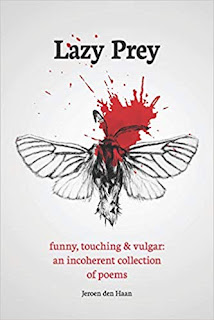 There's no organization to the poems in this book. Nothing links one to another. It would have been a better experience for readers if they had been broken down into categories rather than have to bounce around from poems about the office, to broken hearts, to nature, to sex. As it is, Lazy Prey has no flow.

A lot could be forgiven if the poetry itself exhibited any attempt at being universal, at capturing the human experience. If the poet had a better grasp of figurative language. If there was substance. If it didn't seem as though each (often extremely short) poem was just a randomly scribbled angsty thought. I don't know what the title, Lazy Prey, is supposed to mean, but the poetry itself is lazy.
Posted by Wondra at 10:00