Book Review: Knight of a Trillion Stars by Dara Joy

They say you can never go back but, maybe, what they meant is that you shouldn't go back. Knight of a Trillion Stars is a perfect example of this.

I first read Knight of a Trillion Stars by Dara Joy when I was a teen (when it had a much, much better cover.) Well, I lost my copy in the Great Move of 2003 and it took me a good long time to hunt down the name of the book and author again. (Seriously, you should have seen some of the stuff I had to Google to find it.) I was so excited to read Knight again. 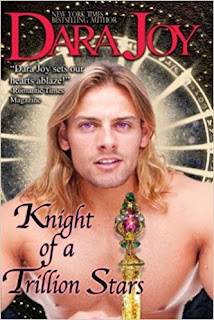 But remember what I said earlier?

I vaguely remember enjoying Knight of a Trillion Stars the first time I read it. Of course, that was a long-ass time ago so maybe I'm just seeing things through the lens of life-wasn't-quite-as-fucking-shite-then. (Hah. Yeah, no.) I'll tell you what I don't remember: I don't remember Knight being so fucking rapey!

Maybe my taste in men has changed dramatically since then? Or, maybe I just hold my novels to a higher standard...

Knight of a Trillion Stars is not written well. The POVs jump around, the tenses are muddled, there are punctuation/grammatical errors, and the speech isn't natural. On top of that, it's cheesy as fuck. Cringe-worthy, kill-me-now cheesy. So, even if it weren't rapey (it's so rapey,) there isn't a lot to recommend this one.

Let's talk about a couple of the little things that made Knight of a Trillion Stars nearly impossible to finish. First of all, Lorgin (famed alien lover - gag) doesn't make any attempt to pronounce Deana's name properly and she just lets him get away with it. As someone whose name is a little... unusual, I can't tell you how annoying that is! (If someone loves you, they can try to say your name the right way!)

Secondly, the sex is just ridiculous. It typical dime-store fashion, he's just TOO BIG! and she's just TOO TIGHT! And, of course, she immediately PASSES OUT when they climax. Oh, and let's not forget that she CAN'T WALK PROPERLY afterward.

Give me a break.

Thirdly, women are treated as possessions and the main character, Deana, acts like that's just dandy. When Lorgin tricks her into marriage, she's just dandy with that too. Except, oh, she does get upset... because she thinks she's JUST NOT GOOD ENOUGH for him. This is not the kind of book I would want teen me to read.

I'm sorry I ruined my memory of Knight of a Trillion Stars by actually reading it - but I won't make that mistake again.
Posted by Wondra at 12:05