Saving Angel by J.L. Weil is like one of those car crashes you can't look away from. You know you'll probably see something you can never unsee, but it's so grotesque you just have to look.

That's probably not a great way to recommend a book but, let's be honest, I don't recommend this book. 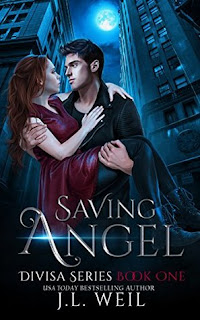 First of all, first-person. First-freaking-person. What the hell is with YA/NA literature always being in first-person?! It almost never works and comes across as just plain lazy. Get rid of the damned first-person and write properly, dammit.

Oh, right. Grammar. Yikes. The writing isn't terrific. If anything, it reads like it was never passed to an editor. The dialogue is awkward and unnatural; the vocabulary is limited; the tenses get confused; the transitions are unclear in places; the wrong words are emphasized; no one speaks without yelling; there's almost no introspection; and the whole thing is juvenile to the point of being childish.

The worst part isn't the author's (lack of) technical ability. No, that honor belongs to the story's relationships. It's incredibly important to point out unhealthy relationships and challenge them. As someone who endured a childhood of abuse, I can't say this enough. Sadly, though, Saving Angel does pretty much the opposite. It doesn't just perpetuate unhealthy relationships - it almost glorifies them.

Angel's father became a raging alcoholic (for no apparent reason,) became abusive, and killed a man. Does she learn from it? No. Does she immediately seek out the first guy who treats her like shit? You betcha. We have to stop these cycles, people! Girls reading this will think that kind of thing is okay and it isn't.

Also, there's pretty much every kind of insult hidden in Saving Angel, from "pansy" to fat shaming. Like I said, childish.

The first thing I noticed when I started Saving Angel (even before the daddy issues) was Angel's fascination with people's looks. It's painfully vain. Worse, every single person - including her mother - is sexualized. Worse, her mom totally pervs on young men (aka: CHILDREN.) Eww.

And just when you think it can't get any worse, it gets a dash of incest!

I already mentioned that Angel sexualizes everyone. She describes being attracted to Chase in a very physical way, even says things she'd like to do to him. Except, oh yeah... she's a virgin. Because they're always virgins, right?

Let's add that to the List of Shit About YA/NA Lit that Pisses Me Off.

Here's another thing for the list: Angel meets another Divisa (half-demon) girl who has the hots for Chase and instantly hates Angel with a passion. We seriously need to get rid of this passé cat fight shit. It's unhealthy and teaches girls that they have to be in constant competition with other women. Stop that shit right now!

Getting back to Angel and Chase's seriously effed up relationship... they're on-and-off-again for no goddamn reason. One minute they're tearing each other's clothes off but, the moment they're interrupted, they're back to hating each other. Why? For the love of the gods and all that is sacred, WHY?! No reason is ever given and that just drives me up a tree.

Aside from being poorly written and out of touch, the main character is always either crying or passing out. (Pause for *eyeroll*) Also, she keeps complaining about how it's always raining (because, I assume, TWILIGHT,) but I come from a similar area and I call bullshit. Hello, crops like that don't grow in constant rain.

All I can say about Saving Angel is that it was interesting enough to at least finish. I like the whole half-demon thing (although they really just seem like vampires without fangs.) There's an entire series, including two novellas. Do I have any interest in reading any of the others? No.
Posted by Wondra at 23:31 No comments:

Pestilence by Laura Thalassa is the biggest surprise I’ve gotten from a book in a very long time. When I started reading it, I thought, Ugh, first person, present tense and almost put it down right then. But, a few of pages later, I came across the phrase, “Oh, for fuck’s sake” and I knew it couldn’t be all bad. 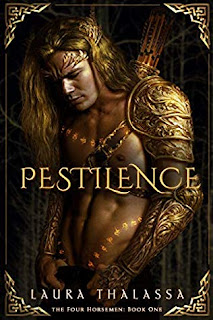 Yes, the language is what originally appealed to me about this book - not for the shock value of just for vulgarity’s sake (though we all know I am a true vulgarian) but because it’s real. It’s natural. This is the way people really think and talk and it’s nice to have that realism. Too many novels try to cover up with awkward, flowery language so this was a nice change of pace.

And, honestly, the first person, present actually works in this case. The tenses don’t get muddled and it flows perfectly.

The premise behind Pestilence is intriguing. It’s essentially a dystopian novel (and you know I gobble that shit up like freaking hotcakes) with a religious twist. The Four Horsemen of the Apocalypse have ridden, killing electricity in their wake and sending the earth into darkness. The survivors try to rebuild their lives, which goes okay for a few years.

The story starts as bad ass firefighter, Sara Burns, tries to kill the horseman (and fails spectacularly because, you know, sent-by-God and all) who takes her prisoner. It follows their ride across North America and the strange relationship between them. I was a bit worried at first that it was going to get all Stockholm Syndrome but it’s handled so much better than that. You get to watch these two amazing characters grow into themselves and around each other.

Beauty and the Beast eat your heart out.

And OMFG did I mention the sexual tension?! Pestilence is hawt. It teases for ages but eventually delivers big time. This book has superb chemistry.

Usually, seeing too many “cocks” in a romance novel is a major turn off for me because it comes across as crass and jarring. But, because Pestilence was created to challenge my pet peeves, it fucking works. The language is consistent all the way through so when you get to all the “cocks”, it just feels natural.

Speaking of pet peeves, you’d think once it got to all the God stuff I’d start to get a bit twitchy, right? Nope. It’s handled in a down-to-earth, rational way that makes it part of the story, rather than a sermon. The bits I expected to have me rolling my eyes had me tearing up instead.

I actually ended up giving myself a migraine because I couldn’t put this book down. (100% worth it.) I’m so glad there are so many books by this author because I think I might be a junkie now.
Posted by Wondra at 10:00 No comments:

Debbie Cassidy's Captive of Darkness has an interesting premise. Wynter lives in a place called Justice Falls that has to pay yearly tribute to silver riders who claim their marked citizens once a year. As one of the only people who can see the marks, Wynter is doomed to know the truth of all the people they've lost while the rest of the townspeople blissfully forget. That is, until the silver riders nab her adopted brother/love interest (I'm gonna give that one a big "Eww!") and she decides to go after him. 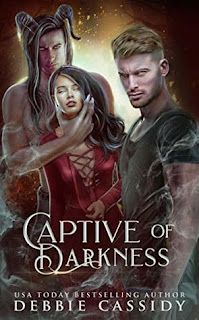 The story really doesn't get interesting for me until Wynter gets to Nawia, the place that is supposed to be Death's home but is being steadily destroyed by Oblivion. Although there are some dangerously rapey vibes from Veles (aka: Love Interest #2,) his struggle to remain human is more interesting than anything happening with Finn, who gets to spend a chunk of the novel thinking he's bonking his adopted sister (*shudder*) under a kind of spell.

There's a whole lot of mythology and folklore in here and most of it is quite muddled. Kind of like the author took a bunch of stuff she liked, dumped it in a pot, and stirred it up until she got the weird mixture that is Captive of Darkness. I'm not saying it doesn't work - it just takes some time to sort it all out.

I enjoyed Captive of Darkness even though it had a SODDING LOVE TRIANGLE at the heart of the story. Can we please stop doing these? Gah. They're insulting. They always suggest that a woman JUST CAN'T MAKE UP HER MIND until one of the men sacrifices his chance for some bullshit reason.

Listen up, people: women can make up their fucking minds, m'kay?

Anyway... Captive of Darkness's real saving grace is remarkably well written figurative language. There are some truly beautifully written lines in this novel. Although... it does get repetitive in places and there are typos scattered throughout, which lets it down.

Oh, and this is just my own pet peeve but I could have done without the “cocks.” I don’t mind that language in straight up erotica but it was a bit abrasive, given the setting the setting. Also, the dialogue could be more consistent. It doesn’t really match the setting in places either.

Despite its flaws, I enjoyed the story and would read the sequel. This one had some good sexual tension so I’d like to see how that plays out.
Posted by Wondra at 12:21 No comments: