I might be taking a few liberties when I include Deep Rising (1998) in a list of deep sea horror since none of the action actually takes place there but, hey, my blog, my rules. Deep Rising isn't a super scary movie. It's more of a comedic action flick but there are creepy aspects and there's a monster from the depths so we're making it work, m'kay? 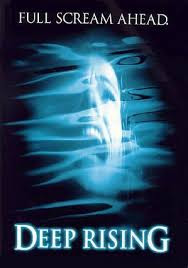 Han Solo wannabe John Finnegan (Treat Williams) takes a job ferrying a group of heavily-armed hijackers led by Wes Studi's Hanover to Simon Canton's (Anthony Heald) newly-launched, hedonistic cruise ship. They have every intention of robbing the ship blind--except, when they get there, they find it already invaded by a bunch of sea monsters who happen to like the taste of humans.

I like Deep Rising. It's fun to watch and makes me laugh out loud. Yes, the CGI is dreadful (I mean really, really bad) but it's got a lot else going for it. For starters, it has a massively diverse cast--though, of course, only two women: the victim (Una Damon's Leila) and the damsel (Famke Janssen's Trillian St. James).

Okay, I'm not being fair to Leila and Trillian. They're both great characters. They're competent, intelligent, and strong. I just get a little tired of action movies being dominated by men, ya know?

At least they don't throw around the "b" word quite so often in this one. Although... there is a whole different kind of sexism in place in Deep Rising. Everything is "lady" in this one and when Trillian doesn't behave, she's a "trollop." So, we've gone from movies where every woman who asserts herself is a bitch to movies where women are free to be powerful--so long as they act like a lady while doing it!

Final pet peeve: the "grease monkey" jokes get old. They can't do anything without him but show him a complete lack of respect. Lame.

Deep Rising sometimes feels like two different movies in one. There's the comedic action movie, then there's the action/horror movie. There are good jumps, lots of male blustering, and tons of laughs. Kevin J. O'Connor's Joey Pantucci is the ultimate in comic relief, with his squeaky voice and Why me? attitude. The humor continues right to the end, when it looks like the leading man and woman will walk off into the sunset together. I don't want to spoil it for anyone in case you haven't seen it but, if you don't laugh at the end of Deep Rising, you're dead inside.

Although the science is more than questionable and the CGI is cringe-worthy, Deep Rising is a riotous explosion of action/adventure with lurking, tentacled horror creeping just below the surface that makes for great entertainment.
Posted by Wondra at 08:00