Every year, as Halloween rolls around, Jay and I start thinking about how to celebrate Birthdayoween. Other than buying ridiculous amounts of Halloween decorations, that means a month's worth of special posts here on Wondra's World.

So, we got to thinking... how can we mix it up? We've done Classic Horror. We've done Modern Horror. Where do we take it this year?

How about the people staring in them?

This year, in the month leading up to Halloween, Jay and I will be taking a look at the actors who make our favorite horror movies.

Oh, and let's make one thing clear before we get started... At Castle Vanian, we don't use the word "actress" because careers shouldn't be gendered. Gendering professions perpetuates unfair pay gaps, which is something that should be long behind us in 2019.

This rather enormous list contains the best actors (female and male) in the horror genre. Well... at least as many as we could remember. Got some we forgot? Let us know!

(I've organized these by the year of birth, for the sake of my own sanity.)

As always, we love it when you weigh in. Drop a comment below and let us know who your favorite horror actor is and why!
Posted by Wondra at 10:00 No comments:

Boo (2005) starts with an amusing Scream parody. It's all downhill from there.

Four college kids decide to break into a haunted hospital on Halloween and get stuck there. Meanwhile, the son of a cop (Michael Samluk's Allan) enlists his father's partner and washed-up actor, Dynamite Jones (Dig Wayne), to look for his sister who went missing after she and her friends also broke into the hospital. 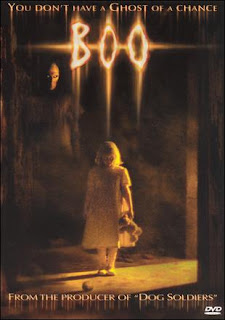 Honestly, the whole "college kids" thing is a joke because the actors are clearly much older than they're supposed to be. It's actually pretty cringe-worthy.

Boo doesn't have much to recommend it in the way of acting (seriously, it's not good) but the sets are effective. The abandoned mental hospital is creepy, which is helped by things like falling dust and long shadows. Light and shadow is a win. Casting... not so much.

Supposedly, the ghost who possesses each of the "kids" in turn makes them mistrust each other until they crack and start killing their friends. Why, I don't know, since that has nothing to do with who the ghost was as a (despicable) person.

They try to set up the mistrust quite early when Kevin (Jilan VanOver) pretends to attack his girlfriend and psychic, Jessie (Trish Coren), then bullies her into going to the haunted hospital which she says over and over she doesn't want to do. His douchebaggery is just too over the top. By the time he shoots Trish's so-called best friend and person he's been having an affair with, Marie (Nicole Rayburn), in the head, you're just like, meh. Saw that coming.

The fourth friend, Freddy (Josh Holt),  is just whiny and lovesick. Poor little white boy stuck in The Dreaded Friend Zone. I hate that shit and I hate movies that perpetuate the myth of the friend zone. Not real, fuckers. Freddy knows he's being used but puts up with it because Marie will eventually fall for his lapdog devotion. Right? RIGHT?

Speaking of dogs... I take away points from any movie that has a dog in it for no reason other than to do die--and Boo really didn't have enough points to lose.

Boo has no focus. There's too much going on. I think I counted four subplots. Pick one, dammit, and do it well rather than trying to do a million things and getting them all wrong.

You've got the mental hospital that's haunted because a lunatic managed to light the whole place on fire with just a match and a newspaper. (Bull.) You've got Jessie's mother who went nuts then died--but not before passing on her psychic ability that none of Jessie's friends respect. (Her friends treat her like shit, by the way. The whole time.) You've got the other group of dumb ass kids that went into the hospital and never came out. You've got Allan trying to find his sister. You've got Dynamite Jones trying to prove he really is a hero. You've got psycho ghost trying to escape in the body of one of the teens. You've got nurse ghost trying to keep him there. And, oh yeah, you've got the ghost of a little girl who was in a mental hospital for no apparent reason except to get killed by the lunatic on the same day he burned it down.

Here's the worst part for me: Boo touts horror legend Dee Wallace as its main star, which isn't even close to the truth. Sure, she's in a few flashbacks but even her presence isn't enough to save this one.

I honestly thought Boo was about three hours long when I was watching it but, no, that's just how long it felt. (It's actually short, at just an hour and thirty-three minutes. Still too long.)

The CGI isn't as bad as some of its peers, I guess, but its used so ineffectively that doesn't matter. They make a big deal out of making sure each other bleed to prove they're not ghosts/possessed/whatever--but the ghosts bleed too. And not just bleed. Bleed, melt, and explode. The viscera is over-the-top and feels like the main focus of the movie at times. Totally unnecessary, especially for a haunting, which should be mostly psychological.

Boo doesn't know what it wants to be and just ends up being a mess. Don't waste your time.

Worlds is a collection of sci-fi microfiction and is the first in a series of Dark Drabbles from Black Hare Press. Some of the stories are creepy, some are heartbreaking, and some are just plain unnerving. Some are even laugh out loud funny (though that might say more about my sick sense of humor than the anthology...) 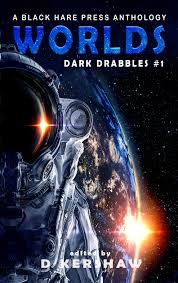 The 300ish stories in Worlds exhibit different levels of author ability, experience, style, and vision. My favourites are "The Summer in Outer Polsari Lasts One Hundred and Fifty Earth Years" by Okala Elesia (which gave me chills,) "New Rule" by Austin P. Sheehan (which made me chuckle,) "Frank's Baby" by Rich Rurshell (which borders on yucky,) "The Mission" by Alanah Andrews (which amused me more than it should have,) "Pew Pew Pew!" by Alanna Robertson-Webb (which invokes Ender's Game,) "Harmony" by David Bowmore and "Sins of the Flesh 2119" by Nancy Brewka-Clark (both of which were straight up disturbing.)

Drabbles are great for people like me who, thanks to mental health issues, struggle to focus. (Yeah, fuck you, Depression and Anxiety.) A hundred words, the length of a drabble, is basically the literary equivalent of a snack-size candy bar and I love to gobble that shit up. It's nice to finish a quick story and move onto something that's totally different but similar at the same time. If you've got a craving for some sci-fi but don't have the time or energy to slog through a massive novel, try Worlds instead. There's something in it for everyone.
Posted by Wondra at 17:55 No comments:

I don't even know where to start with a movie like Eat Locals (2017) except to say that it's a fucking treat. We watched it on a whim and it turned out to be one of the best movies we've seen this year. (Yeah, I know we're a little late with this one. I don't know how we missed it.) 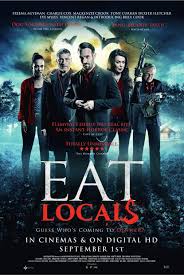 One out, one in. That seems to be the motto of the ruling body of vampires in Britain who meet at a secluded farm to deal with one of their own who has been flouting their laws. Unwitting Sebastian Crockett (Billy Cook) is chosen to take a place among them but, when his addition fails to be approved by everyone, Sebastian is set to become dinner--until a Special Forces detachment shows up. Then, everyone has to fight for their lives (or... er, existences.)

Eat Locals is a hilarious, riotous, action-packed romp. Imagine The Cottage meets Dog Soldiers and you'll be close to how crazy this movie is. It's so, so British, has a cast full of familiar faces, with a kick ass soundtrack. (Hello, The Damned.)

Of course, it's not perfect. For instance, it doesn't explain why Mackenzie Crook's Larousse is so determined to wipe out the vampires, how he knows of their existence, or how the Special Forces know where they are. These are major plot holes that would take down most movies but, really, don't seem all that important here.

Brexit seems to be a major underlying theme in Eat Locals, with plenty of snarky comments tossed around. It's there, but not overt so shouldn't take away from anyone's enjoyment of the film, even die hard Remainers.

Annette Crosbie's Alice--the ruthless, bingo-loving granny vampire--is my absolute favorite. She makes the movie. I love that she's there with her knitting and that she hobbles on with her walker (before stabbing a soldier in the neck.) Cool, cool character.

It's also great because, although it's done in a comical way, Eat Locals also includes a social commentary on rape/child abuse. When someone mentions turning children into vampires, the gathered rulers are horrified. They don't take children, they insist. And consent is important. "Not like this, not without consent," is the line that stayed with me.

Come on, if inhuman monsters can get it, why can't white men?

I freaking love Eat Locals. It's fun and entertaining. The vampires are kind of freaky, with their nasty teeth and glowing eyes, and it's satisfying to watch greedy soldier boys getting their asses kicked. Plus, there are great Thatcher jokes and references to other movies. You've gotta see this one.
Posted by Wondra at 16:48 No comments: