Me: Michael Berryman is an actor you'd recognise, even if you're not familiar with his name. He's a horror fixture who's also done classics like Weird Science and One Flew Over the Cuckoo's Nest.

Jay: I remember Michael Berryman in Weird Science! He couldn't have been onscreen more than five minutes but it was interesting to see him in something besides horror. 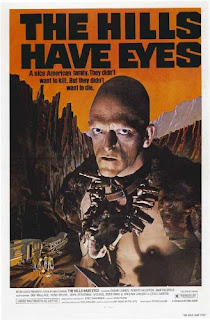 He's a very nice man that's made his fortune by making the best of his looks. When you see him, straight away you think of The Hills Have Eyes.

Me: Berryman has a very distinctive appearance that just begs to be in horror. His trademark appearance comes from something I'd never heard of until we started research for this post, Hypohidrotic Ectodermal Dysplasia. I moan about my wonky eyes while Michael Berryman is out there using his disorder to his advantage.

Jay: It's a horrible thing to say, but he's just so weird to look at, which will always find you a home in horror. His affliction is his fortune. Would he be on this list if he just looked like some Average Joe? Maybe not.

Me: You got the chance to meet Michael Berryman. What can you tell me about him?

Jay: He may look frightening but Berryman is the nicest guy you'd ever want to meet. God, it was years ago. Maybe 2002ish? Honestly, I was a little nervous about asking for a photo because I didn't want to offend him. He was totally fine with it, luckily.

Me: You mentioned The Hills Have Eyes before. Hillbilly horror really isn't my thing so tell me why it's a classic.

Jay: It wasn't my cup of tea either, to be honest. It's one of those films that was huge when I was a kid, at the dawn of the video age. Everyone had heard of it. I preferred Berryman in things like Deadly Blessing, even though it was only a small part. It seems like that's true for a lot of his roles. They might not be massive roles, but Berryman always stands out in a film. 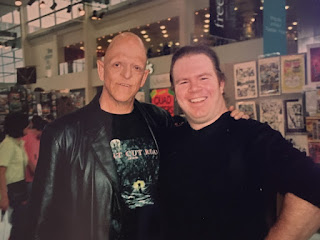 Me: And it looks like he's still incredibly busy. Michael Berryman has something like 9 movies coming soon. Seventy-one and no sign of slowing down. He's an inspiration.

Jay: There are horror actors who have done more films, maybe better films, that you might think are more deserving, but I'll always defend Michael Berryman's right to be on a list of Best Horror Actors.

He looks frightening, like something is kind of off (which is the Hypohidrotic Ectodermal Dysplasia) and, as someone who's always been treated as a little scary myself, I understand a fraction of what he must have gone through. To take that struggle and turn it into a win is something that deserves respect.

Me: I couldn't agree more. (Except I kind of like that you're scary... on account of the whole my not doing people thing.)