Me: I'm excited to talk about Lance Henriksen today!

Jay: I am as well. He's a tremendous actor. As with the likes of Robert Englund and Jeffrey Combs, the man is synonymous with (sci-fi) horror. For me, he'll always be Bishop from Aliens - although my first exposure to Lance Henriksen was The Omen 2. He was also in Pumpkinhead, which is still one of my favourite horror movies. 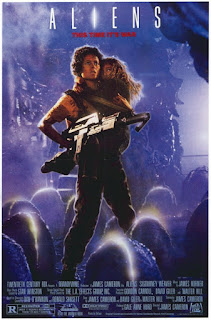 Me: I like the imagery in Pumpkinhead. I also think it's cool that Mayim Bialik is one of the kids in it - but Bialik isn't the subject of today's post.

Lance's career started in 1961. He's been at it a long time - and, at almost eighty, is still very busy. What's the key to his longevity?

Jay: He's a damn fine actor, to start with. He also has a very distinctive voice, which doesn't hurt, and is able to act without acting. Henriksen is believable. It doesn't matter if he's talking about ghosts or Sasquatch, you listen when he talks.

Me: He does have an incredible voice. Very deep and thoughtful. He doesn't ever seem rushed, like he's always in control. I guess that helped him play an android in Aliens?

Jay: It was kind of the role that thrust him into the forefront. He was on a roll after that. His next movie was Near Dark and he was one of the main characters. The next year, he was Ed Harley in Pumpkinhead and carried the film.

As Bishop, he brought a believability to the role. Lance Henriksen is such a different looking guy that you can believe he's not quite human. 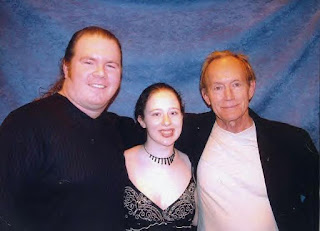 Jay: He has a very distinct look. Like Patrick Troughton. He's not unattractive, just... lived in. That's the only way I can think to put it. His face tells you he's somebody who's seen shit.

Me: Okay, that makes sense. The way I hear it, he had a tough life.

I think that can really help as an actor. The more life experience you have the broader your ability. Lance can go from bad guy to bad ass and every step of crazy along the way. His versatility is incredible.

Jay: It is. That just shows you what a great actor he is, how talented he is. By the time his career really got started, he was damn near forty. That's a lot of life experience. He's never been typecast, which a lot of horror actors struggle with.

Me: It's hard to pick a favourite movie here. He's done so, so much and so many cracking films. Can you pick just one?

Jay: For someone who got started kind of late in life, Henriksen hasn't half made up for lost time! There are a lot of brilliant movies, but there's no question about which is the best. It's gotta be Pumpkinhead. What a film!

I bought it at a car boot sale back in the 90s. An old VHS. I had never heard of Pumpkinhead, but I knew Lance Henrikesen so I gave it a shot. It wasn't a huge budget but Stan Winston (who did Terminator) did the Pumpkinhead monster and made it seem so much bigger than it was. 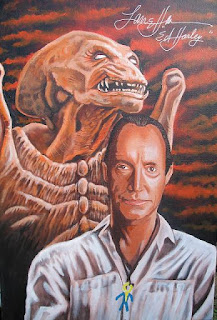 Me: We were lucky enough to meet Lance a couple of times, which was awesome. Want to talk about what he was like to meet?

Jay: I think I've met him three times. He's always been so nice and talkative. You meet some celebrities and they can't give you the time of day - it's funny... you just don't get that with horror actors. They always seem to have time for you...

I did a painting that I wasn't particularly happy with but, when I took it to get signed, Lance took the time to chat with me about it and take photos. He's the sweetest man you'd ever want to meet.

Me: Well, I don't agree with you about the painting. It's a lot better than you give yourself credit for - but we can argue about that another time.

Is there anything else you want to mention before we move on?

Jay: Just that Lance Henriksen is a horror superstar today. I wish we had another twenty years or more with him but, sadly, I doubt it. Like Lugosi and Karloff, Lance is an icon of the generation.

Me: He's definitely iconic. We could probably go on all night but I'll wrap things up here.