Me: Adrienne Barbeau might be remembered best for her relationship with horror director, John Carpenter, but she's a wonderful actor in her own right. What are your thoughts on Barbeau? 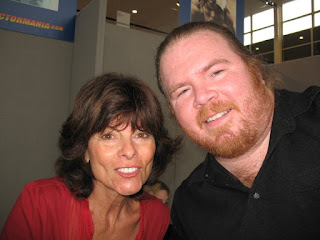 Jay: I didn't become aware of Adrienne Barbeau until... I think about Escape From New York. Then, it seemed like she was everywhere for awhile. She was in a lot of things very quickly.

She was in Carpenter's Escape From New York and The Fog, maybe a couple others, but don't forget that she also worked with Romero and Craven. Regardless of who she was or wasn't married to, Adrienne Barbeau wouldn't have had the career she had without her own talent.

Me: Well, their divorce certainly didn't hurt her career! She's got, what, eight projects coming? Yeah, eight. We see Barbeau as a horror icon but she isn't strictly a horror actor. In fact, her horror work is kind of limited, isn't it?

Jay: Yeah, that surprised me too. Adrienne Barbeau has done a lot of voice over work - which makes sense with that voice. Very husky, like she smoked and drank her whole life.

Jay: Right. Except, as far as I know, she's never smoked.

Me: Adrienne Barbeau has a kind smile and sharp eyes. Oh, and a rack that makes even me jealous. She's a beautiful person. Strangely, she also kind of reminds me of my mom. (Well, except for the boobs. My mom had to buy hers.)

Jay: There's definitely something special about Adrienne Barbeau, for sure. She's never conformed to the stick figure ideals of Hollywood; she's very voluptuous.

Me: Speaking of curves, I can't talk about Adrienne Barbeau without mentioning one of my favourite b-movies, Cannibal Women in the Avocado Jungle of Death. I can't believe she was in that.

Moving on... Creepshow. I want to talk both about Barbeau's role in the movie and her appearance(s) in the new TV show. 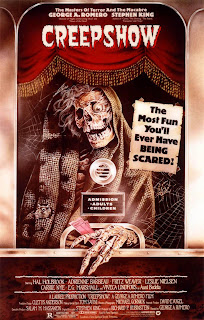 Jay: Her role in Creepshow as the loathsome wife in "The Crate" is small but memorable. There's not really a lot to say about it, except that it's my favourite story in Creepshow.

It's great to see Adrieene Barbeau back in Creepshow. Her roles are so different. She isn't the sex pot anymore; she's an elderly woman.

Me: I've been loving the new Creepshow series. It's fantastic and a welcome return to the franchise. I think it's only right that they brought Adrienne Barbeau back.

Are there any other Barbeau movies that stand out for you? (Especially horror ones.)

Jay: Off the top of my head, no. I mean, there's Escape from New York, obviously, but since that's not horror...

We met Adrienne Barbeau back in 2007. Do you remember that?

Jay: Yeah, of course. It was the same convention that George Romero was at. Barbeau was absolutely lovely. Very personable.

Me: We were lucky to get to meet her.

Well, I'm glad we got to talk about Adrienne Barbeau but we'd better wrap things up here.