Me: Today we're going to be talking about Bill Moseley and it's the weirdest thing... I can picture the characters he's played but not Bill Moseley himself.

Jay: Well, he's kind of an Average Joe. It's his ability that sets him apart, which is why you remember the characters and not the man. 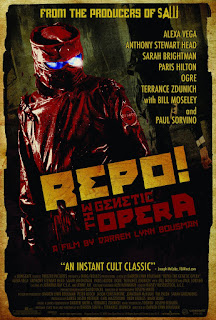 Me: One of my favourite characters Moseley plays - and you should have known that I was going to go there - is Luigi Largo from Repo! the Genetic Opera. Try to deny it if you want, but I know you liked Repo! because I've caught you singing along...

Me: That's the one. You're not a huge fan of musicals so what appeals to you about Repo!?

Jay: It was very different. Kind of like the Rocky Horror Picture Show in some ways. They aren't nice or safe. Repo! is about drug addiction and repossessing body parts. What's not to like?

You know what my favourite is. What's yours?

Me: The zombie one?

Jay: Yeah. It was a clever take on the zombie genre. To be on the air as shit's going down. Kind of a bit Dawn of the Deadish in that respect. Unlike some zombie films,  which never explain the outbreak, you learn in Dead Air that it is a terrorist attack and, eventually, the terrorists get into the radio station.

I like that Dead Air is so different because, although zombie films have always been my favourite, they've just been done to death now. There's nothing new happening so to get something that feels fresh is a nice change of pace.

But, going back to Bill Moseley, you wouldn't believe how much he's been in because he's there, but not always the main character - which is one of the reasons I like Dead Air so much; it revolves around Moseley's character. You get to see him as the lead.

Actually, thinking about it, Patricia Tallman is in Dead Air too. Another reason to like it. 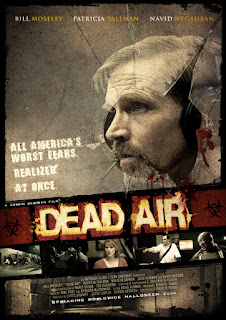 Me: Right. It's a nice touch because they were in Night of the Living Dead together in 1990. I still can't believe Bill Moseley played Johnnie. He just looks so... I dunno, dweebie? Exactly like you'd expect an embarrassing older brother to look.

Seriously, if I didn't know Johnny was Bill Moseley, I'd have sworn blind that he wasn't in Night of the Living Dead.

I'm glad we got to meet Bill Moseley and get him to sign our Night of the Living Dead poster. It's one of my favourites. I'd like to get it framed up and on the wall when we're done renovating.

Me: If we're ever done renovating? These old British houses, man...

I love that you've got these two actors, Patricia Tallman and Bill Moseley, together in zombie movies so far apart. It also makes me a little sad that Patricia Tallman didn't make our list. We discussed it. Wanna tell everyone why?

Jay: Patricia Tallman has done some great stuff - from Night of the Living Dead to Babylon 5 - but that's the problem; her main body of work isn't horror. She's done a lot of different things, mostly stunt work. There's not enough horror there to make the cut, though.

Me: Why did Bill Moseley land a spot on our list of Best Horror Actors then?

Jay: I know I've said it before but it comes down to volume. It really is a huge list of credits. I was surprised by just how many horror movies Bill Moseley has done.

Me: I really am not a fan of grindhouse or Rob Zombie (as a director) and all those grungy movies Bill Moseley has done. Hillbilly horror really doesn't work for me. What are your thoughts on Bill Moseley in things like The Devil's Rejects?

Jay: It's not my cup of tea, either. I don't understand Rob Zombie. How does someone who's an authority on horror make such horrible movies? I just don't get it. 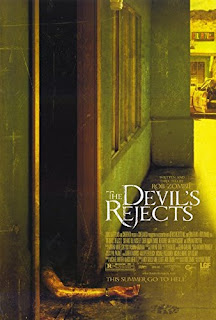 Me: Same, same. Why do you think it appeals to so many people?

Jay: Again, I don't have a clue. I really don't. I don't get what people see in those movies. I didn't mind the first remake of Halloween but the second one was nonsensical. The rest is garbage.

Rob Zombie is a leading authority on horror. He's seen just about everywhere horror movie made but when it comes to making one... it's like Donald Trump being president. Stick to what you're good at.

Me: I waited so long for House of 1,000 Corpses. For what? I think it's the movie I've been most disappointed by. I can't think of a single Rob Zombie movie I've enjoyed. I've gotten to the point where I don't even bother anymore. Even Bill Moseley can't save movies that bad.

Okay, so before I wrap things up, do you want to add anything?

Jay: The fact that Bill Moseley is so nondescript works to his advantage. Sometimes, not standing out makes people better actors because they can disappear into a role. I think that's the appeal of Bill Moseley.

Me: That sounds about right. For me, he's a great actor who just happens to make some movies I freaking hate.