Me: When we were coming up with our longlist of Best Horror Actors, Udo Kier wasn't a name that immediately came to mind. For me, at least. What made you think of adding Udo Kier to our list?

Jay: I've seen him in so many horror films over the years. He's one of those not-the-main-star-but-always-there kind of actor. I don't know how many German horror movies he's done but I bet it's loads.

Me: Flesh for Frankenstein and Blood for Dracula were the movies that took Udo Kier's career to the next level. I'm a little embarrassed to admit that I've never seen them. (I seriously need to rectify that.) Can you tell me about them? Especially Udo's roles.

Jay: Actually, I don't know much about them, either. I think I may have seen Flesh for Frankenstein but it was so long ago I just can't remember. We'll have to watch them sometime.

Me: Udo Kier was born in Germany during World War II. He's still got a very strong accent, all these years later. Do you think the fact that he looks and sounds like your typical German villain has helped or hindered Udo's career?

Jay: It had to help, didn't it? There's always a role for the typical Teutonic knight in Hollywood. You really can just look at Udo Kier and tell he's German, even before he opens his mouth. Need a German general or a villain? You can't go wrong with Udo.

Me: I guess I've got to mention Suspiria and Mother of Tears. Argento movies really don't do it for me. They're too... I guess laboured is the word. Kind of trippy too. What are your thoughts on Udo's Argento films?

Jay: Mother of Tears was alright but I really didn't care for either of them. I always thought Argento was overrated.

Me:Moving on to a film that I actually enjoyed... I loved Udo Kier as Dragonetti in Blade. Vampire just works on him. You liked that one, didn't you? 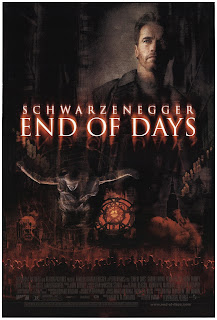 Jay: Blade was good. Like you said, head vampire isn't much of a stretch for Udo Kier. It's a role that suits him well.

Me: I also loved Udo in End of Days. Well, I just loved End of Days. It's one of those movies I keep coming back to, like Stigmata. I love me some religious horror. What did you think of End of Days?

Jay: Well, he only had a small role, really. I enjoyed the movie, though. It was tremendous. It was one of Arnie's best movies.

Me: Can you think of any other films Udo Kier has done that you enjoyed?

Jay: It's surprising when you look at his IMDb page and see just how much Udo Kier has done. He was good in the Halloween remake. Shadow of the Vampire was good too. 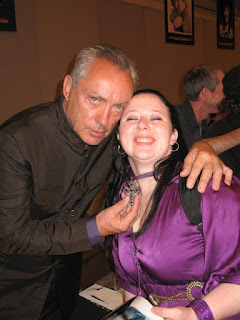 Me: I can't mention Udo Kier without saying how freaking fabulous he is as a person. He was tremendous to meet. I remember him gushing over my necklace and sending us to find a woman with a tattoo of him. He was just too much fun. Your thoughts?

Jay: He was an absolute joy. The fact that he didn't let Showmasters bully him just made my day. When they tried to rush him, Udo would just be like, "I am talking to my friends. Go away." Legend.

Me: Well, before we wrap things up here, anything you want to add?

Jay: Udo Kier is a cracking actor who is still very busy. He's a handsome, polite, dapper man. I'm glad we got to meet him.

Me: Me too. And, although he wasn't someone I immediately thought of, I'm happy Udo Kier is part of our list of Best Horror Actors.