Me: Model and actress, Linnea Quigley, is an activist and was in a band called The Skirts back in the 90's. All very impressive - but what about that makes her a horror icon?

Jay: Can I say 'sheer volume'?

Me: Well, I'd rather you said something else but... 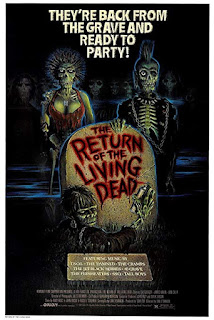 Me: Right. Speaking of horror icons, did you know Linnea Quigley has the same birthday as Vincent Price?

Linnea Quigley didn't start acting, then find her way into horror. She straight up started in horror with Psycho from Texas in 1975 and has been a horror stalwart since then. When did you first become aware of Linnea Quigley as an actor?

Jay: In Return of the Living Dead, as Trash. You kind of had to notice her... she was naked! I used to have friends like that, getting their kit off for no reason...

Jay: I mean... She was absolutely striking. That bright red hair catches your attention. I loved the movie because it was about zombies, the soundtrack was full of bands I loved, and it was about a group of punks. I'd just started to spike my hair as a baby Goth - oh, it wasn't good - but it made me feel like I belonged.

Jay: I suppose the next film I noticed Linnea Quigley in was Night of the Demons in 1988.

Me: That was the first horror movie I saw!

Jay: You were six.

Me: Well, it wasn't voluntary. My sister and her friend were watching it and I wouldn't stop bothering them so they held me down and made me watch it.

Jay: That explains a lot.

Did you enjoy Night of the Demons?

Jay: I did. It's a good, solid horror film. There was a wave of them in the Eighties, thanks to the introduction of the video. To be fair, most were crap, but there were gems. Night of the Demons was one. 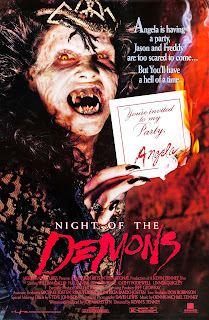 Me: If we move forward into the Nineties a little, Linnea Quigley was in Pumpkinhead II. I know Pumpkinhead was one of your favourite movies. What did you think of the sequel?

Jay: It wasn't good. The only Pumpkinhead movie that was worth anything was the first one. Even the monster itself became silly in the sequels. It was all man-in-a-rubber-suit.

Nothing against Linnea Quigley in it, mind. I was so excited when I heard the second one was coming but was so disappointed when it finally came out. Linnea Quigley's not a tremendous actor but she's good at what she's there for. She's the pretty screamer.

Me: Oh, I almost forgot... Linnea Quigley made an appearance in the new Night of the Demons, didn't she?

Jay: Ha ha. The 2009 Night of the Demons was supposed to be a remake, I guess, but they sexed it up way more than it needed to be. Not the kind of thing you want to find yourself watching with your mother-in-law in the middle of the night.

Me: When you say b-movie scream queen, you really mean b-movie, don't you? I'm looking at movies like Hooker with a Hacksaw...

Jay: Linnea Quigley's the name you want to get if you're making a low budget movie. Just her name alone is enough to get her small walk-on parts.

Me: Which can be both a blessing and a curse, I'd bet. Do you have anything else to add?

Jay: Well, as a teenager-

Me: Well, thanks for stopping by! Don't forget to check back tomorrow to see who our next Best Horror Actor will be!
Posted by Wondra at 10:00