Me: Number 4 on our list of The Best Horror Actors is the legend, Bela Lugosi.

I'm gonna be honest... I'm way out of my depth here. While I have an okay knowledge of the old Universal films, I've only seen them a handful of times. So, when it comes to Bela Lugosi, you're going to be doing a lot of the talking. 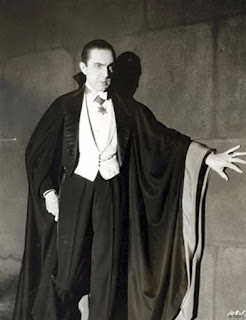 Jay: The thing is with Bela is that he was both lucky and unlucky. He was Hungarian and didn't speak a word of English so it's incredible that he made it as a big star - but Dracula also held him back. I watched an interview with Christopher Lee recently in which he says that he asked Boris Karloff about Bela and all Karloff would say was, "Poor Bela." He was horribly typecast.

Bela was always the mad scientist or the evil genius. Look at his IMDb page and you'll see a lot of ghosts, Frankensteins, and vampires. Considering the fact that he only ever played Dracula twice (like I said, he did play vampires more), he could never get away from it. It affected him terribly. I seem to remember Bela was the first celebrity to have it known that he was going into rehab. You'll have to look that up.

Me: I think you're right. In 1955? I guess we don't know how many celebrities went to rehab before that, but Bela was the first one to make it public. There are interviews in which he talks quite candidly about his problems.

Moving on... One of your favourite songs from the Eighties was "Bela Lugosi's Dead" by Bauhaus. That one came out, I think, the year I was born. Tell me more about it. How does a song like that come along? I mean, it was something like thirty years after Bela's death, wasn't it?

Jay: Well, it - the vibe, the image - was about black and white, like the old horror movies. Bauhaus were always influenced by those old films. That's where the song came from.

It was the Goth anthem. There are still so many people haven't heard "Bela Lugosi's Dead" but when they do, they're like "What the fuck is that?" It gets inside you and stays there. Like Goth, it's all about the imagery it invokes.

Me: I find it impressive that a song about the death of a man who died before Pete Murphy was even born could be so emotional, could reach so many people and become an icon like, I guess, the man himself. It speaks to Bela's influence. I wonder what he would have thought about that?

Jay: Difficult to say. It's like Christopher Lee... he grew to hate Dracula and wouldn't sign any Dracula photos, even. When it comes down to it, though, I think everyone just wants to be remembered.

Me: True, true. Well, I'm not as familiar with the Universal Dracula as you are. I have a general image in my head and I know the plot but that's about it. What can you tell me about Lugosi's performance in it?

Jay: It wasn't my first experience with Dracula (that was Christopher Lee) but it was very good. Memorable. Growing up as a kid, if you did an impersonation of Dracula, you didn't do Lee, you do Lugosi. It's been spoofed so many times in so many ways. Look at Hotel Transylvania.

Jay: Right. Every kid knows what Bela sounded like, even if they haven't seen Dracula - and if not, why? That's bad parenting...

Me: Well, most parents probably aren't as weird as we are but, yeah. Like, the Universal movies aren't any scary than Disney nowadays.

Jay: Right. But the point was that kids know Bela, even if they don't know him. That's what it means to be an icon. 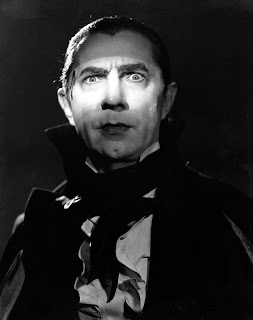 Me: I know Lugosi did a fair few horror movies and I know he struggled with being typecast but do you know anything about the other movies he did?

Jay: You've got things like Abbot and Castello Meet Frankenstein, Mother Riley Meets the Vampire. Fun, pulpy stuff - but forgettable. I don't think we ever got to see the best of Bela.

Me: Considering how little we know about Lugosi, compared to other more recent actors, how did he make this list?

Jay: Bela had been dead over twenty years when I was born and nearly forty by the time you came around. It's understandable that we don't know as much about him. But that doesn't stop him from being an icon. The fact that he's been gone so long and we're still talking about him should be reason enough.

Me: Hear, hear. Right. Last thing... I know there's an item in our bedroom that gives you great pleasure. Wanna tell everyone what it is?

Jay: You mean the whips and chains?

Okay, okay. I fulfilled a lifelong dream about ten years ago when I finally got my hands on a Bela Lugosi autograph. I paid... well, probably too much, but it was worth it.

Me: It is lovely. Well, do you have anything else to add?

Jay: ...no, I don't think so. Bela's spot as a horror legend is pretty much a given.

Me: No arguments here. Let's go watch Dracula then...