UnEnchanted (An Unfortunate Fairy Tale #1) by Chanda Hahn is a difficult book to review. It isn’t exactly well written but it is enjoyable to read.

Mina (the first of several vampire references) Grime is a disaster magnet. Things go wrong around her all the time, convincing her that she’s cursed - which she is. Turns out Mina’s last name isn’t Grime; it’s Grimm and she’s got to live through the stories her ancestors collected if she wants to break the curse. 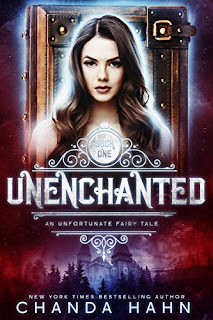 UnEnchanted instantly earns points for not being in first person. (Serious pet peeve.) It loses points, though, because the POVs often get muddled. There’s also a lot of crying, which just gets tedious in YA literature.

The writing is just so-so. It shows no real talent and degenerates in quality as the book goes on - to the point where the author switches from describing a mode of transportation as a van, then a truck, then a van in the span of a couple pages.

It’s also completely lacking in figurative language, which is a shame when you’re talking about a modern fairy tale. I’ve come to expect a certain level of poetry in fairy tales (metaphorically speaking) but UnEnchanted doesn’t deliver.

In addition to a myriad of grammatical errors and typos, UnEnchanted struggles in the dialogue department. For the most part, it’s unrealistic and awkward.

It sounds like I’m coming down pretty hard on UnEnchanted but I’m just getting the novel’s problems out of the way so I can say that, despite its flaws, I enjoyed UnEnchanted very much. Hahn might not be a good writer in the technical department but she tells a good story.

The characters are likeable, the action is easy to follow, and the story is engaging. I totally got into it, which is impressive because, usually, so many errors would have me turning off in no time. The ending even kind of broke me a little. I’m actually looking forward to the sequels.

I wish Hahn had just gotten herself a decent editor. The right editor could have taken UnEnchanted from flawed but enjoyable to something really special.
Posted by Wondra at 10:32