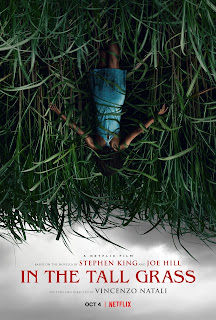 In the Tall Grass is a brilliant novella by Stephen King and his son, Joe Hill. Like its Netflix movie adaptation, it starts with two siblings on a cross country drive. That's where the similarities end.

There are times when it is absolutely necessary to deviate from a work of fiction in order to make the movie work. There are even times when the movie version is better (The Mist, for example.) Neither are true with In the Tall Grass.

Becky (Laysla De Oliveira) is nineteen and pregnant. She intends to give her baby up for adoption. She and her brother, Cal DeMuth (Avery Whitted), are on their way across the country to do just that. Unfortunately for them, they're lured into a seemingly endless field across from the eerily named Church Of Black Rock The Redeemer by the cries of help from a little boy named Tobin (Will Buie Jr.) who has been lost in the grass with his parents.

That's the bit that makes sense. The rest gets a little... trippy.

Not long into the film, Jay gave me a look and said, "They'd better fucking explain this."

That was only the first time Becky and Cal died.

Harrison Gilbertson's Travis shows up looking for his baby mama (Becky) who's been missing two months - much to her surprise. Yes, she's alive again and thinks she's only been in the grass a few minutes. So, what's going on? Some weird ass temporal rift shit, that's what. They're in an a loop that keeps resetting when Tobin's dad, Patrick Wilson's Ross, kills them all.

Oh, Tobin's mom is in there too - but she's completely inconsequential to the story. It's like they threw her in because she was in the novella but didn't really have any use for her in the movie.

Know what else has no purpose in the movie? The time warp stuff. Absolutely unnecessary. It has no part in the novella and the movie would have worked much better if it had stuck to the original story, rather than adding elements that only confused the audience.

Also, the movie is painfully artsy. The sweeping shots and upside down flips, etc. etc. don't add anything to the film. Either the director was trying too hard to prove they had vision (in which case, fail,) or they were trying to pad it out. It didn't help build atmosphere and didn't make In the Tall Grass the horror movie it was supposed to be.

The only frightening thing in the movie is Tobin. That kid is fucking haunts-my-dreams terrifying. There's just something about his face that gives me chills. Before he goes all freaky (after touching the mystery rock,) he looks like a normal kid. Not scary at all. Afterwards... *shudder* Good casting job. 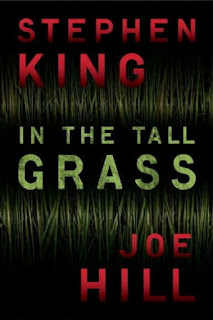 One of the things the novella had that the movie didn't was community. In the film, the field is out in the middle of BFN. In the novella, there are houses all around. You can even hear dogs barking. I find that much more frightening. When a community knows something bad is happening but they let it go on for whatever reason, that's scary. (Mostly because it really happens.) They made a mistake not keeping it in.

I guess I don't have to say that I didn't like the film adaptation of In the Tall Grass. And, before you say it, I read the story after watching the film so it's not like I was prejudiced beforehand. It just tried too hard. There was no need for all the time jumping; the original story worked much better with a linear storyline. If you're thinking about watching this one, do yourself a favor and read the book instead.
Posted by Wondra at 09:00