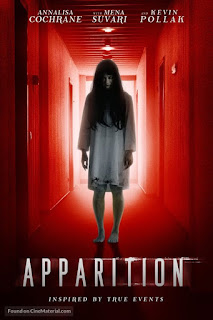 I wasn't sure we were watching the right movie when Apparition started. I'd read the synopsis (a group of friends use an app to connect with ghosts and are led to an abandoned castle) and was expecting something totally different than we got for the first, oh, third of the movie. Eventually, it got into the story I was expecting and became more engaging. I'm normally the first one to complain if there isn't enough backstory but, in this case, they lingered a little too long over it, for what we got from it.

Okay, backstory is important. So important. But the right backstory is more important. There's a lot of focus on Simon Lathrop's Jeremy and his kid brother (I don't think he's ever named) so you're expecting the story to circle back to Jeremy's brother but it never does. You also learn that Mena Suvari's Anna is essentially being held prisoner by her baby daddy but never learn why she allows herself to stay in that situation or what the nature of their relationship is. Then, there's Officer King (Jake Jacobson), who only mentions his baby daughter right before he's murdered.

I applaud any movie that takes the time to create backstory but half-assed backstory isn't good enough. Do the work. I'd rather watch a longer movie that uses backstory well, then one that makes it nothing more than a blunt plot tool.

Anyway, the acting is good in Apparition. Kevin Pollak is hateful as Warden White, which is exactly what you want in a good villain. (And something Pollak does exceptionally well.) My favourite performance was delivered by Grayson Russell, who played Warden White's son, Sam. I love Sam. He's this adorable, awkward nerd who steals every scene he's in. You get the feeling Sam's on the spectrum but the movie never clarifies.

Sam is also the reason Apparition left a bad taste in my mouth. The ending was absolutely perfect--right up to the point where they went for the cheap jump and ruined it all. What a waste.


I will give Apparition this, though: it almost never did what I expected.

Between us, Jay and I have seen just about every horror movie there is to see (Unless you've sat through Attack of the Killer Refrigerator, don't come at me.) so we usually have a pretty good idea of what's going to happen, and where. Apparition shied away from the obvious, for which I give it major credit.

Apparition also stayed away from the riskier special effects that sometimes make a good ghost story cringe-worthy. There were a few good jumps (Jay rates a horror movie by how many times I jumped. Apparently, Apparition earned two Wondra Shit Herselves.) and the child ghosts were suitably creepy. It was atmospheric where it needed to be and grungy where it needed to be.

If we're looking for a horror movie to watch, we're fairly predictable. Jay will usually go for the zombie/infection movie while I lean toward religious (ironic, I know) movies and ghost stories. Part of what made me pick Apparition was the whole Millennial thing in the synopsis. (Yes, I'm a Millennial and I'm not ashamed of that.) Also, the fact that there's an app at the centre of the story. I'm a sucker for techno-haunting fusions.

What kept my attention was that Apparition isn't just another app-gone-wrong-boo-technology story. The app works just fine. It does what it's supposed to do. I love that technology fits so smoothly into a timeless ghost story, rather than technology being the bad guy. More of this, please!

While we're talking about the synopsis, though, let's not use the word "castle" when we don't mean "castle." Some of us live near them. 🙄 The movie is based on The Preston School of Industry, which was called Preston Castle. Not the same, yo. Still, it's filmed at the actual place where it all went down, so props to the film crew and actors for that one.

Okay. So... verdict? I enjoyed this one.

All I can say is don't go for the cheap-ass jump (which was disappointing, rather than surprising) and ruin a good movie. Hit me up if you disagree.
Posted by Wondra at 11:38 No comments: