Me: It's time to talk about Amityville. Whatcha got? 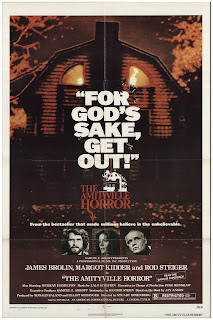 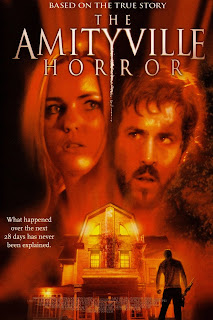 Jay: I actually watched the sequel to The Amityville Horror before I saw the first one. It's a better movie, the sequel, but the 1978 Amityville Horror was good. The sequel was definitely scarier though. There are moments in the first one, like the scene with Rod Steiger as Father Delaney, when the voice says, "Get out!" I thought, 'This has got a lot of potential,' but it never lived up to it.

Me: The original definitely wasn't as spooky or as jumpy.

Anyway, I went to rewatch these and wow, there are so many different remakes, with so many different names! I just wanted to keep it simple for this list so I went for the two that are actually called The Amityville Horror. They're both very close to each other.

I remember the bit you mentioned with the priest but I didn't like that scene. I thought it was a little heavy-handed with the symbolism. Yeah, pestilence, we get it. Move it along.

Right. So, the movie is about a demonic possession but it's also kind of a haunting. The comes across better in the 2005 remake, I think. You actually see the ghost of the little girl that was murdered by her father, for instance.

Jay: Yeah, the effects in the remake were very effective.

Me: Right, and you really don't get any of that haunting across in the original. I don't know if it's because they didn't have the technology for it or just didn't think to do it.

Jay: You really only see the kids in flashbacks in the original. They didn't really dwell on it so much.

Me: Ah, flashbacks. That's one of the things I wanted to talk about. I don't like it in the beginning of the original movie where the realtor is showing them around the house and it constantly cuts to him killing everyone. It interrupts the flow of the action to show you what they've already just shown you. I really hated that.

Jay: I know what you're saying, but I think it was to show you that this is what happened in this room.

Me: But it only just showed that five minutes ago!

Jay: Well, yeah, but it's definitely more of a room by room account. Besides, maybe they did it for the American audience... 'cause you know- Ow!

The remake is a slicker movie. You can see the budget being put into it.

Me: Sure, the quality is better. So are the special effects. I especially love the bit where Ryan Reynolds's George Lutz goes into the closet and you can see the hands holding the little girl ghost up to the ceiling and muffling her and she's flailing and he doesn't see your because it's just above his head.

Jay: Yeah, it's like the ghost is fighting for help and I found that was really interesting. That ghosts can be held hostage by a demonic force. Clever.

Me: So... which movie do you think is better, the original or the remake?

Jay: It's been a little while since I've seen the remake but, still, I think it'd be unfair of me to say either movie was better. They both have merits.

Me: I can say it though, right?

Jay: Hah. Yeah, I'll bow to your wisdom on this one.

Me: Well, in the remake, the flow was better. It moved more naturally. It was easier to watch.

Jay: I'll give you that. I thought the original was too long. There was too much bumbling about, too much stuff that they didn't need to put in - like with the money for the caterer.

Me: Yes, and they never did come back to it. Oh my God. I cannot even begin to tell you how much unresolved things like that in a movie will drive me fucking insane.

Jay: I keep telling you, OCD.

Me: Never mind that. Let's talk about the endings. In the remake, they knock him the fuck out and drag him to the boat and all get away. In the remake, he rescues the dog and goes back to the car. At the end of both movies, they do the text over thing and explain things. They're practically identical, saying that the family left after 28 days and they never return for their belongings. I guess that's good because, you know, consistency.

Jay: I do think that the ending of the remake was better. It was more exciting - whether or not it was more accurate to what actually happened. And, honestly, I don't mind when a film who wants to embellish it if it makes it better. I think if you're going for the cinematic experience, you want it to be more exciting.

Me: Yeah, well, I know they did just leave their belongings behind and left in a hurry but I'm not sure which ending is closer to what actually happened.

What about the characters? Take Kathy Lutz, for example. Which performance do you prefer?

Jay: I think I'd have to go with Margot Kidder. It's nothing against Melissa George, I just think Margot Kidder is the better actor.

Me: I don't know that I prefer either over the other, really, but I can tell you which George Lutz I prefer. I mean... the thing with Ryan Reynolds's performance (aside from the fact that it was Ryan Reynolds) was the fact that he did a better job of showing the way that the house was affecting him. When they left the house you can see that it eased up and when they came back to the house, it got heavier. So you could actually see the effect that the house was having on him. Whereas I don't think that James Brolin really brought that across as well. I mean... kinda hard to portray any emotion under that beard.

Jay: At least you eventually realized it was James Brolin and not Josh Brolin.

Me: Well, we're looking at this list of all of these different remakes and sequels and reboots and re-imaginings (more than twenty, by the way.) Tell me, what is it about the Amityville house that has captured our attention for so long?

Jay: I think it's how we really want to know if there's something after. You know, do we just die and become nothing or do we have souls that carry on? Personally? We're all energy and energy can't be destroyed so it goes somewhere. As a society, we're drawn to movies like this because we're all dying (sorry, pun) to know what becomes of us.

Me: For the record, if I die, I do not want to get stuck hanging around this house for eternity.

Me: I've got too much to do to bother with all that dying crap.

Jay: You know, you might be just ornery enough to do it, too...