Me: Choosing the 1985 version of Day of the Dead over the 2008 remake was kind of a no-brainer, for both of us. I think the reason for that is that it's an okay movie but a terrible remake.

Jay: It was awful, wasn't it? Especially when you consider the fact that they kept postponing it. You knew it was coming and when it finally did it was like... ugh... it was just a pile of shit. We had to wait all that time and it was not worth it. Aside from the fact that there are zombies and a couple of characters with the same names, the two movies have nothing in common. 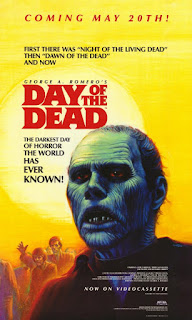 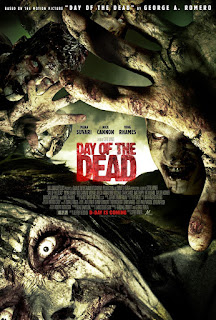 Me: Right. There are soldiers and zombies and... that's about it. From the second it started, it felt... I dunno... cheap? Like a b-movie. It's kind of hard because I'm not just comparing it to the 1985 film, I'm also comparing it to the remake of Dawn of the Dead, which had a cracking director and a hefty budget. You can see the difference in quality before the movie even gets going.

Jay: Yeah, you can tell that they didn't have anywhere near the budget. The movie feels so different from the remake of Dawn of the Dead because there was no continuity. It had a different company, a different director - and it did not benefit from either.

Me: Okay, so my biggest problem with the 2008 Day of the Dead is the zombies. What is up with those zombies? They don't have to die, they just change. Their flesh instantly rots. They're super fast, like the Dawn zombies, but they're also like super zombies, able to leap stupid townsfolk in a single bound. I... I just can't even with that.

Jay: There was no need for it. For any of the changes. The Dawn zombies were fast, they were terrifying. The Day of the Dead remake made unnecessary changes to something that was already perfect. I don't know if they were just trying to get away from what been done before, to do something different - but it didn't work. I didn't like it at all. Honestly, I didn't like the film at all.

Me: Same. It just doesn't work. I know with some of the movies we've considered, it's been difficult to pick between the two. So not the case with this remake. It's so bad it's almost impossible to compare it to the original, which was a clever idea and a good story.

Jay: Yeah, at the beginning of the remake I was like, okay, we'll give it a try. As it went on, though, it just got worse. I mean... zombies firing guns? A super intelligent zombie? Come on.

Me: I'm kind of surprised they picked Mena Suvari for the main role.

Jay: She was awful in this. She's kind of a 50/50 actor anyway - and this was not one of the roles that worked for her. It was also a bad choice to have Ving Rhames as Captain Rhodes. Because he was such an important part of the Dawn remake, he shouldn't have been in this one if he wasn't going to carry on the role.

Let's face it, there's nothing redeeming about the Day of the Dead remake. Be honest, nothing could ever capture the atmosphere of the original.

Me: It feels like we've kind of hit a dead end with the remake, so talk to me about the original. Of the Romero films, Night is probably my favourite but I know you prefer Day of the Dead. Why is that?

Jay: It gives you a sense of claustrophobia. You're not safe above ground but living underground is making you mad. Everything is too close. Too... lifeless. There are so few of you left. It feels so... futile. Doomed. Nothing good can come from it.

Me: It felt like the end. What little bit of civilization is left is just falling apart.

Jay: That was the whole point. Night was the start. Dawn... the zombies have gotten a foothold. By Day, they've more or less wiped us out. And why? All the same reasons everything is falling apart now. No one can agree. No one takes responsibility. It's Trump's America. We have a complete inability to do anything. We're the minority and we're losing fast.

Me: Which is different from the remake. That's part of what bugged me. Say you just look at the three remakes, right? The outbreak starts in Night and spreads in Dawn... then starts again in Day. It's all out of order. It doubles back on itself, making it a horrible addition to the (then) trilogy. And I really don't want to get into how much I hated the next one in line. Land of the Dead just did not work.

Jay: It was a disappointment, for sure. Romero really should have gone with Twilight of the Dead, rather than Land, like he'd planned. Or, even Dusk. It would have rounded it off nicely.

Jay: Money, of course. The studios wanted so much control and Romero had to make so many compromises.

Me: Okay, but I don't want to get into the shit show that was Land of the Dead because (thankfully) they haven't remade it yet. So let's get back to comparing the two versions of Day of the Dead. How do you do that?

Jay: I don't. I mean... you can't. Maybe I'm biased because I saw it so long ago. Because I've seen it so many times over the years. Although the zombies weren't to the standard they are now, they were still good. A little too blue still, but good. Plus, it was a nice ending to the original trilogy.

Me: I love the beginning of Day of the Dead, the 1985 version. Not the bit with the hands coming through the wall, because I thought that was dumb. I love when they land in the empty town. The way the newspaper flips up with the headline, "The Dead Walk!" And that huge ass gator moseying down the steps. It was a powerful scene.

Jay: Did you notice the gator's mouth was taped? If you look, it's the same color, but the tape is there. When the gator arrived, they couldn't believe the size of the thing but the wrangler was like, it's fine as long as its tail doesn't flick you. Bet they found that comforting! It's a hell of a moment when you see it. It doesn't care about zombies because it knows they're rotten.

Me: So, one of the things about the remake that bugged me was Nick Cannon's Salazar. The originals and remakes up to this point all had powerful black people in main roles. Then, you get Salazar, the dopey comic relief who's there to make ghetto jokes. I hated that.

Jay: I'm glad you mentioned Terry Alexander's John because I loved his character. I mean... my favourite character will always be Joe Pilato as Rhodes - but that's because he was such a cock. Anyway... I love the bit where they're getting drunk and John tells Sarah what he thinks. That speech! 'You want to put some kind of explanation down here before you leave? Here's one as good as any you're likely to find. We're bein' punished by the Creator... Maybe He just wanted to show us He's still the Boss Man. Maybe He figure, we was gettin' too big for our britches, tryin' to figure His shit out.'

Me: I love that you know it. Also, not surprised. I have to ask... Is Terry Alexander really Caribbean?

Jay: Funny enough, he's not. He's actually from your neck of the woods, I think. They did a reunion not long ago and you hear his natural voice and it sounds weird.

God. You know... it's terrifying to think that these films are so freaking old! When did that happen?

Me: Hah. I think about the time we started getting old?

Me: Hah! Focus, old man. Back to the movies.

Jay: Right. It boils down to this: Are there better films coming out now? ...I don't think so. Better effects maybe, but not better. I think Hollywood is at an impasse. Maybe this pandemic will inspire them or give them time to think it over. Make them come up with something fresh.

Me: You've gotta hope so - just so something good comes from all this.

Jay: One of the reasons the original is a far superior film. Just the location itself lends an atmosphere that you can't get when you're running around a town. The underground location was so effective that every cast member became ill during the filming of the original. You can feel it, too. You feel uncomfortable without realizing why.

It's one of those films I saw in the pictures and came out having been on a rollercoaster ride. Does it still hold up? Yes. Are the effects that good? Yeah. Some of the acting... pretty much. Whatever you think of Romero, he was a good director. Of the three zombie films (I won't include the others,) Day of the Dead was his masterpiece. Night was good. Dawn was superb. With Day, he hit it spot on. It was nasty. Visceral. Bleak. That was the thing. You didn't really get bleak films that much at the time but Day was bleak and it worked.

Me: We haven't really mentioned it yet but there is actually a third remake of Day of the Dead, Day of the Dead: Bloodlines from 2017 and it works a helluva lot better than that 2008 version.

Jay: It does... but it's still doesn't compete with the original.

Me: No, but at least you can see echoes of the original. You have the bunker - although, it's in a mountain, rather than underground. You've got the scientist versus military thing going on. It's a better remake - but then it goes and blows it by having super smart, super sneaky, super fucking creepy Max.

Me: And what the fuck is up with those two movies? They both have zombies that are freakishly into one of the women. A zombie isn't in love. A zombie isn't a rapist. I mean... that shit would fall off!

Jay: You've clearly thought about this too much...

Me: I'm disturbed by the social commentary. What does it say about our society that we've moved to not one, but two separate movies that sexualize women from a zombie's point-of-view?

Jay: And, on that note, I think we're done here.

Me: Okay, okay. I yield. But I'm still disturbed.