I kinda pushed for this one so I'll explain. Unless you'd seen Curse of the Demon (or Night of the Demon, depending on the country,) you wouldn't really recognise Drag Me to Hell as a remake. They certainly didn't bill it that way. 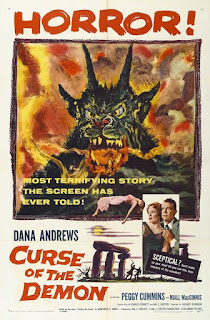 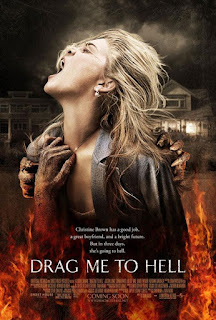 Me: It is, but there are so many similar elements that you can't deny that's what it is.

Jay: True. It was also Sam Raimi's long-awaited return to horror. He's good at comedy and action but he truly excels at horror.

Me: He definitely has a very unique style. And there actually is a lot of humor in Drag Me to Hell.

Me: Okay, so there are some similarities between (I'm gonna call it) Night of the Demon and Drag Me to Hell. It's the same premise, the demon and the cursed item, you also wanna watch the shadows. The shadow work, for example is phenomenal in both films.

Jay: Yeah, it really was. The the effects in the original are superb, considering it was 1957. They were smart by not showing the demon often.

So, you go to 2009, and the effects are just out of this world and it's a bit slapstick in parts (like with the the goat.)

Me: It's sort of Evil Dead 2, isn't it? He includes the comedy because of how scary he could make it. I mean, Raimi always said he would never do another film as bad as Evil Dead, but you know, Drag Me to Hell isn't all that far away. Drag Me to Hell made me jump so many times.

Jay: There are some very nervy moments and, yeah, some real nasty stuff. I mean, look at the protagonist, Mrs. Ganush. She's terrifying.

Me: I like that you called Mrs. Ganush the protagonist, rather than Christine.

Jay: Oh no, Mrs. Ganush is the victim, the wronged party.

Me: That's a fascinating take! I mean... it is kind of a revenge story. When you turn the tables like that, it becomes a very different movie.

Jay: Exactly. The woman, Christine, could have helped but she was only thinking about herself. It's all about greed.

Me: Which makes it very different from the original, from Night of the Demon.

Jay: In what way?

Me: Well, Drag Me to Hell is very personal. It's about a person who got screwed getting her own back. Night of the Demon is impersonal. There's no personal hatred or anything, it's just a group of pagans who want to make a point.

Jay: They want to be left alone. They want these people to stop trying to prove that they're phonies. The demon is relentless but it's-

Me: It's kind of just doing a job. It was summoned to attack this person so it does its job and leaves again. I guess the demon in Drag Me to Hell is the same, just nastier.

Jay: Right. The demon in Drag Me to Hell is revenge incarnate. It's summoned because Christine shamed the old woman, Mrs. Ganush, in front of the whole bank. In Night of the Demon, Dr. Karswell summons the demon from something he found in an old book. In Drag Me to Hell, it's almost like it's a patron, not saint, but a guardian of this gypsy family.

Me: I love that. I think I'd take a guardian demon over a patron saint any day!

Jay: That sounds about right for you!

I miss the old Romani gypsies. They used to travel through our village every now and then, selling charms and telling fortunes. You should have seen their caravans, they were works of art.

Me: Did your mom buy a charm when they came through?

Jay: You didn't dare not buy one!

Anyway, back to Drag Me to Hell...

Jay: Well, back to Night of the Demon. At the end, you know Dana Andrews is going to win because he's swapped the parchment.

Me: It's a great twist in Drag Me to Hell. After all that, digging up the old woman, giving her back the button... it's all for nothing because it got mixed up with the coin. It's a final little victory.

Jay: The ending of Drag Me to Hell does have a really nice twist to it. After all that shit, it's still coming after her and she doesn't know it. Old Mrs. Ganush finally wins.

Me: Whereas Night of the Demon is more of a warning against paganism, isn't it? Like, sure, you can summon this demon - but it can just as easily be used against you. Tut tut, caution, and all that.

Jay: I never really looked at it that way, but yeah, I guess it is.

It's fitting that both movies end at the train station. It's a nice symmetry.

Me: Here's a big difference between the two, though. We've spoken before about how movies back in the 50s were so nice - and Night of the Demon, while atmospheric and spooky as hell, isn't any different. It's nice. You'd let your kids watch it. Drag Me to Hell, on the other hand...

I forgot how freaking gross that shit was!

Jay: It's extremely visceral. It's also a reminder, though, of what the horror industry missed when Sam Raimi walked away from it. He could have done so much for the genre. It's a shame.

Me: What about the differences between Ganush and Karswell. I mean... In Night of the Demon, it's clear that Holden is the protagonist. He's fighting for his life against this unwarranted attack. Like you said, it's not as clear in Drag Me to Hell. Ganush, really is the protagonist, so it's right that Christine gets hers.

Me: Well, that's not the only difference between the two, is it? I mean, I want to look at the characters, Ganush and Karswell.

Jay: Ah... right. Well, Karswell is quite the dapper English gent. He's a philanthropist, there doing magic tricks for the kids. Switch to Drag Me to Hell and you've got Mrs. Ganush who is one scary bitch.

Me: She's not just scary, she's nasty. I mean, taking her teeth out at the desk at the bank. Gah.

Anyway, we're running on out of time so I want to ask: after talking about both movies, do you agree that Drag Me to Hell is a remake of Night of the Demon?

Jay: Absolutely. Not in name, maybe, but in form. It's like Raimi took the rough template from Night of the Demon but said, yeah, I'm gonna do this, but I'm going to do it my way. And he did a fabulous job.

Me: Agreed. So, here's the next question: who is our winner?

Jay: If I'm honest, it's a tie for me. Despite their differences, they're both excellent movies.

Me: I'll give you that one. I can only watch about half of Drag Me to Hell because it's so disgusting so I'm inclined to edge toward the original, but only slightly. I'm happy to call it a tie as well.