Me: I'm excited to get started on this list because I've been having so much fun rewatching some of these movies. I'm also glad Night of the Living Dead was such an obvious choice because narrowing down the shortlist has been tough!

Jay: It's rare for any remake to be better than the original, but it does happen. 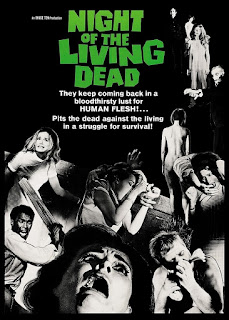 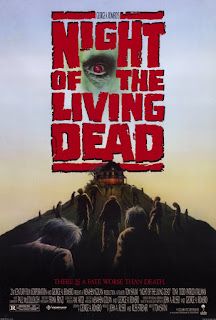 Me: I'm gonna tattle on you a little here and tell everyone that you didn't even have to rewatch these two because you've seen them both about a million times.

Jay: That's a bit of an exaggeration.

Me: You quoted half the movie while I was watching the remake.

Me: Nope, that was my point.

When I watched the original Night of the Living Dead, I was struck by how freaking annoying Judith O'Dea's Barbra was! Omg, I hated her way more than I remembered. After a few scenes of her crying, I wanted to feed her to the zombies myself.

I guess what I'm saying is that biggest difference between the two films for me is the change in Barbara's character. What was it for you?

Jay: For me, it was how polished the remake was, how slick. You can really see the difference in production value. Of course, it's also twenty years worth of technological improvements.

Me: Honestly, the black & white graininess doesn't bother me. I can live with that. I have to pick the remake over the original just because I can't stand Barbara. Which do you prefer?

Jay: I much prefer the remake.

Jay: Like I said, everything about it is just better, from the production value to the acting. That's not the original's fault, by the way! The original was ground breaking - but Tom Savini is a master of visual effects. It was always going to be amazing, especially with George watching over him, as it were.

Oh, I'll tell you what else I really like... the soundtrack. It's... I'd go so far as to say funky. There are lots of strange and wonderful sounds. It gave the film an unnerving quality.

Me: I hadn't really noticed the score until you said. The acting was definitely better in the remake, though. The dynamics between Tony Todd's Ben, Patricia Tallman's Barbara, and Tom Towles's Harry Cooper led to a massive amount of friction, which is always more fun for viewers.

Not gonna lie, I'm partial to Patricia Tallman anyway, because of her role as Lyta in Babylon 5. Even if I hadn't known her from that, though, I would have appreciated the fact that her character is the only one in the movie with any damned sense.

Then, there's Tony Todd, who's just incredible in everything he does. And don't get me started on Cooper. Tom Towles did such a great job that I can't even look at the character without wanting to scratch his eyes out.

Jay: Yes, Tony Todd and Patricia Tallman were especially superb. There's the difference, serious actors against armatures who were doing it to help George out back in 1968.

Did you know the original Johnny is in the end of the remake? He's one of the rednecks. I was amazed he was the only one they got for a cameo. I'm pretty sure most of the rest of the cast was still around at the time. I mean, aside from Duane Jones, who hadn't long died.

Duane Jones did a good job, even though he was an accident. Everyone makes such a big deal about Ben being black (especially since he gets killed at the end,) but his being there wasn't intended. One of George's friends pulled out and he got Duane instead. A happy accident.

Me: What do you mean 'a happy accident'?

Jay: Well, I think it had to be a happy accident for George because he was always quite political. You see it all the way through his zombie films. When he filmed the original, not many black people were the main stars of movies during those days. It was before Blaxploitation, etc. Then there's Night of the Living Dead, with a main character who's black, which makes the film so much deeper.

Me: Agreed. I took a class in university called The American Gothic and we studied Night of the Living Dead for just that reason. The difference between the original, where the black man didn't become a zombie but died anyway, and the remake, where the black man became a zombie, was a major point of discussion.

Since we're talking about it, I have to ask. Jones vs. Todd. Who wins?

Jay: Well, he's tall and imposing so he has a massive on screen presence. It's that voice that sets him apart, though. Kind of like Christopher Lee or Vincent Price. They were great actors but their voices make them stand out. Same with Tony Todd. Just think about the Final Destination films. You recognise that voice every time.

Me: What about O'Dea? Did you hate her performance as much as I did?

Jay: I don't know much about Judith O'Dea, but I doubt she was a serious actor at the time, if she'd done any acting at all. Maybe it's unfair to her because she was just doing what George told her to do, right? That's really all women were supposed to do during that time, look scared and cry a lot.

Fast forward to 1990, though, and you have a history of strong women in horror, like Ripley in Alien. Patricia Tallman brought a total reversal to the role of Barbara and it really improved the - what did you call it? The dynamics of the film. She holds her own.

Really, of all the characters, Barbara's is the biggest change. Most of the characters were more or less the same. And, yeah, Barbara kind of starts out the same but, by the end, she's the one you think will survive.

Me: I love when she shoots Cooper at the end.

Jay: Yes! I never wanted someone to die so much - although that wasn't all Cooper's fault. Ben wasn't perfect, either. Think about when he smashed the television because he couldn't get over his hatred of Cooper.

Me: Right. The men were all kind of useless. It's sad when Ben dies, though, and just extremely satisfying when Barbara kills Cooper.

It's a great bit, that. The two Good Ole Boys who've been with her since the night before just look at her, then at each other, and you can see the awe in their faces. It's like they can't decide whether they're terrified of her or want to propose.

That whole bit, with the rednecks having a party, is so...

Jay: Satirical? George was really good at that.

Me: Yeah, satirical works. But also real. I come from redneck stock, remember. I can 100% tell you that my family would have been there.

Jay: Saying nothing. Your family likes me.

Jay: Not a lot. The only thing that let it down is a couple of scenes with Uncle Rege that aren't good. That's my only real criticism. It looks like a dummy.

Me: We were talking about that when I watched it last night. It's kind of silly, compared to how well the rest is done.

Okay, well, what did the original do better? It had to do something better, right?

Jay: No, I don't think so. That's not me being a smart ass, I honestly tried to think of something. The original goes down in history as the grandfather of the zombie movie. And, yes, Hammer did a good job with Plague of the Zombies, but it's not the same. Plague was scary, but George took zombies and turned them into mindless monsters, rather than voodoo slaves.

Me: He changed the game.

Jay: Absolutely. Romero revolutionized the genre but, honestly, it wasn't really until they did Dawn of the Dead that the genre really boomed. It kind of rode that high until the 90s, when Savini came along to add his own twist.

Think about it. 'They're coming to get you, Barbara...' You'd never seen anything like that intro. And now how many times do you hear it now?

Me: Seems like every horror movie finds a way to sneak it onto a television playing in the background now.

Of all the zombie films I've seen, Night of the Living Dead will always be one of my top 10. It was beautifully filmed but also nervy. I judge movies on how nervy they make me. I don't get scared watching horror movies so if a movie makes me nervous, it's done a good job.

It's funny, at the time, I didn't even know a Night of the Living Dead remake had come out. I came across it on Sky and thought 'I'll watch it but it won't be as good as the original.' I was wrong. The remake isn't just better, it's a rollercoaster. It starts quickly and leaves you guessing until the end.

Me: Well put. We have a lot of movies still to discuss so I suggest we wrap it up here for tonight. Let's go watch the next movies on the list...