Me: I know we're starting to sound like the old broken record here but... A Nightmare on Elm Street has to go to the original, right?

Me: Because the new Freddy sucks?

Jay: Well, Jackie Earle Haley as Freddy didn't have anywhere near the charisma of Robert Englund. The new Nancy was okay - who was the original, Heather Langenkamp?

Me: Yeah. I assume they changed Nancy's last name to Holbrook as an homage to Hal Holbrook?

Jay: They changed it? I didn't notice. I wouldn't have thought it had anything to do with Hal Holbrook, though, since he wasn't associated with the franchise.

In the original, Nancy's father was John Saxon, who was an excellent actor. Huh. We've met nearly all of the original cast, with the exception of Johnny Depp. 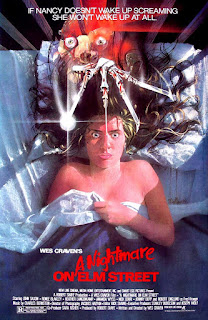 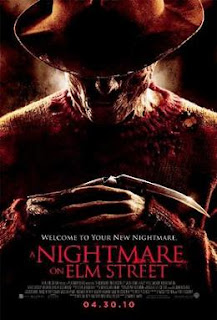 Anyway, I was never overly fond of the Nightmare on Elm Street movies, or Wes Craven. There aren't many of his films that I thought were very good and none of them were scary. You know, he just wasn't John Carpenter or George Romero. Just not scary - and they should have been. Somebody that can attack you in your dreams, right? But I just found it more of a comedy than a horror.

Me: I like that Craven's films have both a humorous element and a horror element.

Jay: The problem was I found the comedy far more entertaining than the horror. They work better as comedies than horrors because they're just not that scary. Stuff that my friends found scary, I was laughing at.

Me: Well, maybe you're just a sicko?

Me: Anyway, in the original A Nightmare on Elm Street, you know Kruger was a paedophile (because they told you) but it was a lot more explicit in the remake. They did this whole bit with him luring children away and, I dunno, I felt like it was unnecessary. We know what a paedophile is, we don't need the visual.

Jay: Don't forget the original was early 80s and, actually, we didn't really hear that word much then.

It's kind of like how we had the video nasties in the 80s - more like video snores because they were just so contrived. But, anyway, that stuff was banned then but can be shown now and stuff that was shown then wouldn't necessarily be okay to show now, like racism and stuff.

Me: What, in relation to A Nighmare on Elm Street, are you getting at?

Jay: Well, paedophiles were around - just look at Jimmy Saville - but it was this dirty secret no one talked about. You never heard the word. So maybe the original, which couldn't have had those scenes, needed them. It would have been enlightening and scarier, actually, to see a paedophile in action back in the 80s.

Me: I see what you mean. That it would have been better to have those scenes, which really aren't necessary anymore, in the original because the original needed them but couldn't show them because it wasn't okay to talk about then.

Jay: It's kind of a circular explanation, but yeah.

The real thing that disturbs me about A Nightmare on Elm Street, especially the original, is that they took this figure of revulsion, a damned kiddie fiddler, and made him... fun.

Me: I'm so glad you said that because it's something that's been bugging me. It's weird that Freddy is such a funny, likable character because, hello, he's a fucking paedophile. Eww.

Jay: It really is an eww. I mean, Freddy, Jason, Michael - none of them should be heroes but we've kind of made them that. With Freddy, it's all down to Robert Englund. He brought so much charisma to the role that it's hard to hate him.

Me: But in the remake, you've got Jackie Earle Haley and I'm sorry but there is nothing redeeming about his character. He's just gross and hateful.

Jay: Exactly. And, in that respect, it's better. You shouldn't like him. He's a monster, literally and metaphorically.

Me: I'll concede that the remake is more effective in that way - and only that way.

The makeup, on the other hand, is just a no. They had the technology and the special effects to actually make him look like a burn victim, rather than just an angry scrotum, but they dropped the ball.

Jay: I think there was talk of making him look more like a burn victim but the powers-that-be changed their mind because they didn't want him to be too repulsive. I think it would have worked better, but I guess they were thinking about butts on seats. Since there's already talk of Robert Englund returning to the role, I guess they didn't get enough butts on enough seats.

Me: Not surprising, really.