Jay: It was so well cast-

Me: Which one are we talking about? 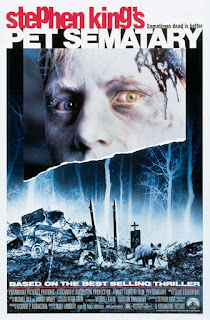 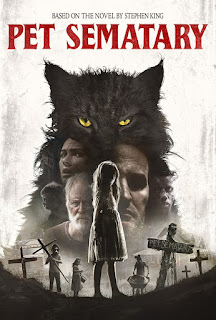 Me: Is that your choice?

Jay: Yeah, yeah. The remake was okay. I mean, it wasn't bad. The problem is if you haven't seen the first one the second one is great. If you have, the remake is kind of pale. The actors are okay, but the two people that give the best performances are in the original, starting with Denise Crosby as the mum.

Me: Actually, I kind of hated her character. She was so annoying.

Jay: That's what I mean. Denise Crosby is such a brilliant actor that she can make you feel those emotions. Can make you disgusted or angry. I can't even think of who played the same character in the remake.

The other person was Jud, John Lithgow's character in the remake and Fred Gwynne in the original.

Jay: They both gave really good performances, but for me, Fred Gwynne gave a little extra.

Me: Actually, I thought it was kind of shitty the way that, in the original, he basically lured these people to the cemetery and told them exactly what to do. Straight up, grab the cat. In the remake, he's a bit more reticent. The dad actually starts digging but you can see Jud fighting with himself. Should he tell him? Ah, hell. He has to.

Jay: Yeah, he does tell him about the cemetery, but he says they come back wrong. It does come with a warning.

Me: Eh... I'm going to take you to bury your daughter's cat, but it's going to come back wrong. Why would you do that?

Jay: I dunno... I can see how losing a pet would make you desperate enough to try.

So, here's the thing between the original and the remake. I thought the remake tried too hard.

Jay: Yeah, it strived to outdo the original, but failed.

Me: Like with the masks and the procession. I was like, okay, you're trying to go a little bit Wicker Man here and you really don't need to.

What I'm saying is that thirty years on you can't do better? If you can't beat something in a remake, for God's sake, don't don't try.

Don't get me wrong, I think Pet Sematary is a good remake.

Me: Well... I thought it was at first. I liked it the first time I watched it, but then I watched it right after watching the original and then I was like, I really don't like this.

Jay: Well, that's the problem, isn't it? Watching the two together, you see the remake for what it is, a pale imitation.

Me: Right. But, to be fair to the remake, there were a couple of things I liked better - like with her sister. It really freaked me out, the bit with the dumbwaiter where she fell she was crammed into it at all. Shudder. I like it because I didn't like it at all.

Jay: I don't remember that exact bit but it would really mess with my claustrophobia.

Me: Yeah, you wouldn't like that bit at all.

I have to say I think the remake kinda wussed out by not killing the little boy, Gage. Argh. It's a difficult bit because it's a cop out but it's also clever. He's in the road you're waiting for what you know is going to happen. Then, the truck stops and it kills the girl instead. Good move or a bad move?

Jay: I don't know. I think they just wanted to bring something different to the table. Like you say, you were expecting a boy to die. It was an interesting move - not scary, though.

Me: Gage didn't really have the same role in the remake. He was almost a nonentity. In the original, though, he was fucking terrifying.

Jay: Again, there's the problem. I mean, his innocence. The best part of the movie for me was always the bit where Louis, the dad, injected Gage, where he put him down.

Me: It's not even just the way he spoke, it was the way he looked. He was creepy as fuck.

Jay: I don't know if that was deliberate, but yeah, it works.

Me: This is going to sound stupid, but I even think the freaking cat was scarier in the original.

Me: Whereas the other one just looked feral.

Jay: Yeah, and again, like I said, you could have done so much more with a cat in this new one because of the CGI. You could have given the thing glowing eyes if you wanted. They missed a lot of tricks.

Me: I'm with you in saying that the original is the better movie but... Well, the ending is very very different. Not only do you have the daughter buried in the cemetery, she also buries her mom and her mom comes back wrong. They kill the father and the father comes back wrong. Suddenly, you've got the little boy locked in the car by himself. The house is on fire and his family is walking toward him. Great moment.

Jay: Eh... I preferred the original, with him waiting for her to come back and kill him. I prefer the original film totally.

Me: Well, I think the original is the better movie but the remake has a better ending. The ending is one of the only things I do like about it. It's clever and the imagery is fantastic.

It's interesting because... I'd like to know where it goes. Either of them. In the original, what happens after she kills him? Is she walking around? Do her parents find her? In the remake, you've got an entire family and you don't know what the hell they're getting up to. The possibilities are endless.

Jay: It says something that they remake didn't do well enough to earn it the sequel where you might have found out.

Jay: Hah. I guess neither of them really needed a sequel. It's better left to your imagination, anyway.