Me: Okay, I kind of had to twist your arm to talk about Poltergeist because you said to me earlier that you were never really into either movie.

Jay: No, not really.

Me: Can you give me a little bit more? 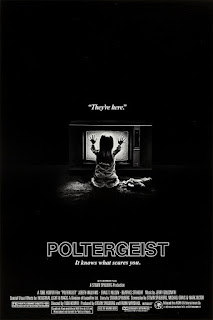 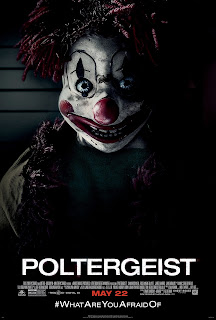 Jay: Well, Spielberg was a producer on the original, so that's always a good sign. And Tobe Hooper was director, which is also good. Even with both involved, the original Poltergeist was... okay. Not spectacular, but good.

The really interesting thing about the original Poltergeist movie is the fact that its production was meant to be cursed, ending with the death of Heather O'Rourke, the little girl who played Carol Anne.

Me: Um, I think her on-screen sister, Dominique Dunne, died too?

Jay: She was strangled by her boyfriend, if I remember. But, there were other actors that died from the franchise too. It was a little surprising that they decided to do a remake, with as cursed as they believed it to be.

Jay: I found it very entertaining. The haunting bits were good, like the bit where the chairs move and then the slow build-up until you find out that the house was built on a cemetery and they never bothered moving the coffins, just built straight on top of them.

Jay: That's a good a question. I honestly don't know the answer.

Of course, Poltergeist gave us a couple of classic horror lines. "They're here," and "This house is clean."

Me: I'm glad you brought that up because 1. It's so much less annoying when the little girl says it in the remake and 2. I wanted to ask what you thought of Zelda Rubinstein and Jared Harris.

So, when Tangina comes into it, there's not really any kind of explanation or anything. She's just there and they're like, okay she's gonna do this now - and she doesn't even do it. Really, it's all the mom.

But in the remake, you get a good build up with Carrigan, with the tv show and such. And they actually make him part of the story, give him his own story within it. You don't get that with the original. Tangina's character is just kind of throwaway.

Jay: Well, Jared Harris is a tremendous actor - but if someone imitates that line from the movie, it's Rubinstein's character they mimic.

Me: Fair point. But I still like Carrigan better.

Okay, but characters I don't like. First of all, either father. They're both dicks, the one in the remake even more so. In the original, though, I got distracted by how very Conservative the family is and that just annoyed me. This election has got me so fucked up in the head that I can't even stand fake Republicans at this point.

Jay: Hah. Yeah, I don't think anyone else would even have noticed that.

Me: Here's the other thing that bugs me about the original... Why the fuck did it just start happening? The houses all have a very lived in look and the neighbours all clearly know each other, which means they've been there for awhile. I think at some point they say it's been months, but I'm not sure. Either way, why wait so long to start shit? If I was an unquiet spirit, I think I would've fucked with that family the second they moved in.

The remake is better for me because it literally starts the moment they move in. It makes more sense.

Jay: Hmm. I guess I assumed the family in the first one had just moved in too. It's been a long time since I've seen it, though.

Me: I also like the family better in the remake, especially the older daughter. She honestly didn't seem important in the first one. I don't know why they even included her in it. Mini rant: I thought it was disgusting that the builders sexually harassed the older daughter and the mother just stood there and laughed. Eww.

In the remake, the older daughter, Kendra, is actually part of the family. She's actually in most of the movie.

Have I sold you on the remake yet?

Jay: Not a bit. Don't get me wrong, I thought it was okay. If I hadn't seen the original first, I might have enjoyed the remake as much as you did. But I didn't. I honestly don't know why they remade it. If you can't do it better, don't fucking do it.

Me: Except I think they did do it better.

Jay: You're entitled to your opinion. The critics didn't particularly like the remake, though, so I think more people agree with me. In fact, they're talking about remaking it again.

Me: Yeah, I'd heard that the Russo brothers wanted to get their hands on it, but I assumed it was more because they're such hot property that they can do whatever movie they want.

Jay: Probably, but they should leave this one alone. There's no point in making another one because it won't be able to compete.

Me: Well, thanks for talking about Poltergeist, even though it wouldn't have been your choice for today. (And you're wrong, the remake is better.)