Me: Snow Beast. Okay, so I know that you're going to pick the original and I'm not going to argue with you. I just want you to explain why. 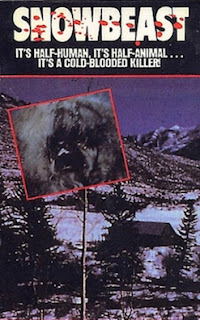 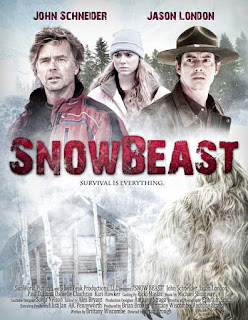 Jay: It's all the monster. I mean there was no menace once you saw it, which happens right away in the remake. It was a man in a mask. A bad one.

Also, the soundtrack was mediocre. The acting was mediocre. I'm not saying it was great, the original Snow Beast, but what it lacked in acting, it made up for in atmosphere.

Me: There's a lot to be said about not showing the monster if you've got something that's obviously a man in a suit. It was kind of killing me the way that every time they did a close up on his feet because it looked just like the the boots you use for your Beast costume. That was kind of cringe-worthy.

But clear something up for me. You said that the original wasn't great?

Jay: Yeah, but despite that, it still holds up well for a monster movie that was, I presume, made-for-television.

Jay: Well, it's easy to find out. I definitely don't think it was made for a cinema release. So I think it was a made-for-tv movie, like Killdozer. Doesn't mean they weren't good, just that they didn't have the same production value.

Anyway, back in the late 70s the world went mad for things like Sasquatch and the yeti and things like the Bermuda Triangle. Snow Beast came on the heels of that. It was great, the first time we watched it. There was a heavy snowfall that year, which was a perfect time to watch it. Snow Beast frightened me but it terrified my brother.

Me: I thought you terrified your brother.

Jay: Well, yeah, you know, you have to have something to terrify him with, right?

Me: You're kind of evil, you know.

Anyway, so... I was just surprised to hear you say that Snow Beast wasn't that great because I thought you really loved it.

Jay: No, I do love the film. It's a very good film even though, by today's standards, it's quite tame.

Me: Yeah, it is kind of gentle for a horror movie. But, you're right. It did age well. I mean, obviously you've got things like the wardrobe and stuff - which actually isn't that bad for the original when you consider the fact that most of it's done in ski garb, which hasn't really changed much in forty years.

Jay: That's what I mean. There isn't a lot (besides, like you said, wardrobe) that screams that it was made in the 70s. But, yeah, it is gentle. There's no real foul language or gore.

You don't see guts hanging out or anything like that and the monster you only see in flashes. I mean I suppose the biggest look you have the monster properly is when he comes to the celebration and she sees it through the window and, later on, when they've hunted it down. But it would they really did keep it to just flashes of the thing.

Me: They tried in the remake, but it didn't work. It was almost comical, the way it was always running behind people, they look behind it's gone. Over and over. It didn't work the first time but they just kept at it.

Jay: In the remake, they also try showing things through the monsters eyes but it just wasn't menacing. Not at all.

Me: One of the interesting things that they do on the original that they don't do in the remake is when the monster kills somebody. It doesn't really show anything, it just freezes, and flashes red, then leaves it up to you you fill in the gaps - a clever move if you don't have the money or talent to do the gore well.

Jay: Right. The only real time you see anything like gore in the original is when you see an arm hanging down with blood on it.

Me: Where the fuck has it been all this time?

Me: Like, this resort town didn't just spring up overnight. It's been there for a long time. Where the fuck has it been?!

Jay: But there's the difference with the original. I mean she's been looking at Sasquatch and stuff. If there is such a thing as a Sasquatch (and I believe there is) if it's traveling, if it's migrating, it will show up in new places. If it's not moving, there's no reason it should come into contact with humans. Or, maybe his way of moving normally has changed because of construction or human interference.

The original wins again because it just inhabits some place that's already there. In the remake, he supposedly digs out a den - except it's a little too perfect.

Me: Omg. So, even if the rubber monster wasn't Doctor Who worthy (and it was) his den would be because it's perfectly packed, everything is perfectly flat. Perfectly carved out. It's like wow, he's really good at that!

Jay: And it's like seven feet high. It can walk upright just fine. That's some fine workmanship for a monster.

I understand why they tried to remake it but they didn't do it better. I don't think the budget was that big with the original, but don't think was that small either. I mean they were clever with the way they used what they had. Even though it was a made-for-television movie, the remake had better effects and graphics at its disposal but didn't use them well.

Jay: It depends if they showed it or not. That was the whole thing with the original. It was ominous because you didn't know what was stalking everyone. No image of the monster, just a growl. Maybe an arm or a leg.

The music helped with that because it was so atmospheric.

Me: Right, you said that before and, yeah, the music wasn't scary at all. It was like something from Danny Elfman, right?

Me: On top of that, damn. The whole movie was like if Lifetime had decided to go into horror. It was a little too nice, a little too squishy. Yeah, like everybody died, except the kid and her dad and they discovered how much they really loved each other. Gag.

Jay: Huh. According to IMDb, they used the same monster suit in the remake.

Jay: Same one. And that's the power of not showing it.

Me: Okay... So why do you think you went from the first one was all about the resort to the remake that was this weird thing about hunting for lynxes? Why do you think it changed?

Jay: I think they were just trying to bring it up-to-date, that there was a reason to be there other than just skiing. If the budget was lower - and I expect it was - you can get away with a lot more if you're in the middle of nowhere looking for cats than you can if you're filming at an expensive ski resort.

Me: That makes sense. It gives you a lot of forest to use and not as many indoor shots.

The remake had more recognizable actors (like John Schneider and Jason London) and the actual film quality was better but... well, nothing else was.