Me: The Thing vs The Thing from Another World. I'm not going to start by asking you which one is better because I want to compare them first. 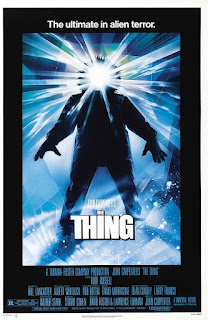 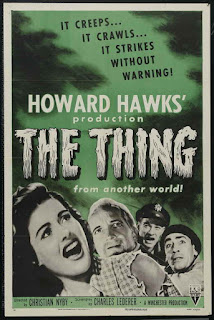 Jay: I guess the first thing is the time. I mean, the age. The Thing from Another World was released in 1951 and I can only imagine it was terrifying at the time because it still holds up well today.

Me: The original is fun, I'll give it that. I always enjoy watching it.

Jay: It is a lot of fun. But, this is a horror list and, like I said, we can't judge how scary something like The Thing from Another World was because we're so desensitized now. Things are so much more visceral these days.

It's kind of like my nan saying she ran home after seeing the original Dracula and Frankenstein movies. It seems comical now but was reality then. So, the movie is fun for us - but was probably terrifying at the time.

Me: Now, The Thing from Another World is... well, nice. It's super nice. And tame. You could let a little kid watch it now.

Jay: Yeah, but also in general. Things that were taboo then or deemed too scary to show are fine now.

With The Thing, there was a bit more effing and blinding, sure, and it was certainly more atmospheric thanks to effects, but it's more than that. It's more visceral, not as bad as some of the video nasties, maybe, but certainly more than anything from the 50s.

Me: The remake is a whole new kind of horror. It's what we call weird horror, I guess. It's visceral but not really in a blood and guts way. I don't know if I'm explaining it right. The Thing is gross but not in a "I'm gonna throw up" way, more in a "Well, that's disturbing" way. Like, the bit with the two faces nearly merged together. Blegh.

Jay: That bit is actually really clever because they tied it into the prequel. Actually, they did a really good job tying the prequel into the The Thing. I recommend watching the prequel first, every time. It adds credibility to The Thing.

Me: You know, I forgot that the beginning of The Thing showed the space ship landing. I only remembered the helicopter and the dog. And, honestly, I'm 100% the idiot that would protect the fucking dog.

Jay: Yeah, you and me both.

Me: Going back to the original... I never really got why there was a whole military base up there. I mean... a science base, sure. But why this huge ass military presence?

Jay: You've got the Cold War to thank for that. In the 80s, when you were born and The Thing was made, the Cold War-

Jay: Unfortunately. But the Cold War was winding up. It was full fledged back in the 50s. Of course, you didn't have the technology so instead of a room in The Pentagon watching everything across the ocean, you needed people a lot closer. Hence the base in the middle of nowhere - but a whole lot closer to Russia.

Me: That's a really good point. I'm glad you explained it because I didn't get it. Here's another thing... in the original, the base is perfectly tidy and everyone's enthusiastic and neat. In the remake, the base is a hot mess and all the people there are untidy and on edge. That seems more realistic to me.

Jay: It is more realistic. Drop the America-fuck-yeah from the original and you've got a bunch of people doing a shitty job because they need the money. Those kinds of jobs usually pay well because they're so horrible. You see that more in The Thing.

Me: Can we talk about the monster in The Thing from Another World?

Me: It was! But here's the thing that bothered me... it was spawned from a freaking plant? How does that even work? How did they come up with that?

Jay: I don't think you're supposed to know. science and technology were advancing rapidly during that time, during the Atomic Age, and I think it's just one of those wild theories that scientists were coming up with at the time. Like the theory that all of our solar system is actually inside something the size of a marble.

Me: With how nuts the doctor goes, putting everyone else at risk, I can see how that fits in. There's an element of playing God - or a warning against it, I guess.

Jay: And also a fear of the unknown, of what could be outside our solar system. Who's to say what an alien is or how it's made? Growing from a seed might not be outside of the realms of possibility.

Me: What about the acting in the original? It was so... I dunno, aww shucks. That's what I'm going to call it, Aww, Shucks acting.

Jay: Oh, yeah. It's dated now, with all the jolly hockey sticks.

Jay: I think it helped that a lot of it must have been done in a studio. Just look at some of those backdrops! Obviously painted.

That changes in the remake. It's not all black and white anymore - and I don't mean that in the literal sense. The outdoor scenes seem very blue, which makes it feel even more unsettling.

Jay: But it's also kind of natural. Not to that extent, but you do get that blue tint. If it ever snows again, look at the mountains. You'll see that blue hue.

Me: I know you love it when I do this but I'm going to do it anyway...

Jay: I swear, you're the only one who pays attention to these things. I can actually answer that, though, at least where the women were concerned. Carpenter did a lot of research and the research showed that it was unlikely women would be up there. He did catch a lot of flack for it, but it was realistic.

Me: To be fair, I liked the woman in the original.

Jay: Let's be honest, the blonde  woman was nonentity.

Me: Actually, yeah. I didn't even notice her until about halfway through.

Anyway, I loved... Nikki, was it? She was cheeky. She was take charge. She gave him hell.

Jay: She was also saying things that you'd never hear back then. Like, calling him an octopus and drinking Hendry under that table.

Me: Yes! I love that. Hendry is cool, but a lot of the other men are just as sexist as you'd expect for that time, constantly talking getting women naked and the like. Yawn.

Jay: A lot of it is due to the times. They expected a certain amount of brevity from a film at the time, to keep it from being too dark. You know, otherwise people just lose their minds.

Me: I dunno... I have a hard time believing people were quite so fragile. I mean, we'd just fought a world war and all. Maybe the folks in charge of making movies wanted to believe that, but I'm not sure it's true.

I did want to ask about one more thing, though.

Me: In the original, the monster is radioactive. It's not in the remake. Do you think that has anything to do with a shift in fears?

Jay: Hmmm. Probably not. I mean... it's been buried for thousands of years, right? It probably would have lost a lot of the radioactivity anyway. Maybe, though. A lot of the monsters during the 50s were radioactive and you don't get that as much anymore, I suppose.

Me: One of the reasons that I like to compare the old and new films is because you can see a change in societal fears in action. In the 50s, we were much more afraid of outsiders, that represents in a lot of alien invasions. In the 80s, in the midst of the AIDS pandemic, there's a fear of something invisible being inside us, inside people we thought we could trust. If they remade it again now, I wonder how that fear would change again?

Me: Eww. No movies about Trump, please!

You can see echoes of The Thing in movies like The Faculty and The Host - but also in games like Resident Evil, with... was it the Nemesis?

Jay: You mean Burkin? With the eye on his shoulder?

Me: That's right. The remake kind of transcends the original because of that reach. Because it's still relevant.

Jay: It helps that The Thing doesn't age. There's nothing, really, to age it, except maybe the lack of technology. Other than that, it still holds up remarkably well.

Me: So... are we giving this one to the remake?

Jay: Without a doubt.