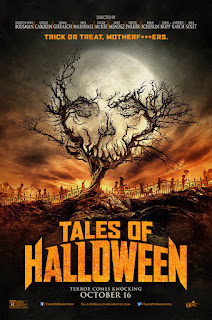 The stories told during Tales of Halloween follow a loose timeline that's easily followed by the children trick-or-treating through the film as well as Night of the Living Dead playing on the various televisions throughout. There are many homages to other classic horror films as the film goes on, starting with Adrienne Barbeau as the husky-voiced radio host - a nod to her role in 1980's The Fog. You may also spot a candy bar named after legendary horror director John Carpenter in "Sweet Tooth" and Evil Dead's Necronomicon hiding in the background during the "Friday the 31st" segment.

Tales of Halloween starts with a stylized animation that takes you on a tour of the town and introduces the stories you're about to watch. It ends with a brief return to the same animation, which wraps things up nicely. The ten stories that take place in the interim vary in style, ranging from creepy urban legend to alien abduction, but fit together perfectly regardless of their differences. They all have have brilliant imagery - whether it's the dancing flames in "Ding Dong," the ultra gore in "Sweet Tooth," or the creepy fog in "Grim Grinning Ghost," Tales of Halloween is a visually pleasing film.

There are witches, demons, creeps, and monsters galore in this one. They're all very well done, too, even if some of them do lean toward hilariously cringe-worthy. (I'm referring, of course, to the claymation alien in "Friday the 31st.") The Attack of the Killer Tomatoes style jack o'lantern rampaging through the town in "Bad Seed" is a favourite of mine, as is the revenge-driven demon in "The Weak and the Wicked," which is my favourite story of the lot.

Although each of the stories are very different from one another, they do have a few things in common, starting with their humour. (Tales of Halloween is billed as a comedy/horror, after all.) But they all do a great job of subverting expectations as well. None of the stories go exactly where you expect them to so, by the time you get to the end, you find yourself wondering just what the fuck to expect. Add a healthy dose of fakeouts and jump scares and you've got a must-see Halloween movie that's just plain fun.