Hades (Contemporary Mythos #1) by Carly Spade revolves around digital forensics examiner, Stephanie Costas, who has the ability to read auras and an unhealthy obsession with 80s music. (As someone married to a person obsessed with 80s music, trust me, it's unhealthy.) Dragged to Corfu, Greece for a holiday with her best friend, Sara, Stephanie meets Hades, actual god of the Underworld. 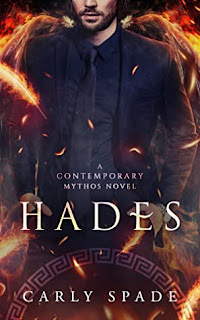 Hades has been sent on vacation by his brother, Zeus, who is tired of Hades's moping over Persephone, who's run off with Theseus. He tries warning Stephanie away, knowing they can never be together because of his obligations, but they can't seem to avoid each other. Cue the romance.

This is a sweet one. Although the writing itself isn't that great, it's a fun story and enjoyable to read. I especially like the ending, which is straight up adorable. As an added bonus, it doesn't end with them having babies, which gets tedious with romance novels.

Fair warning: the description of Hades says that it's an "adult romance," which isn't really true. There's a single sex scene, nearly at the end. And it's not super steamy so I don't think it needs the warning. Also, it says that Hades is a "Hades/Persephone re-imagining," which isn't true either. (And can't be since Hades and Persephone are both characters in the book.)

So... I have one problem with the book, one suggestion, and one pet peeve. Let's start with that one. When talking about the rivalry between Michigan and Ohio (which is totally real,) the author says, 'Her hatred for their rival, Green Bay, covered anything related to Michigan.' Um... nope. Green Bay is not a team from Michigan. I almost walked away from the book at that moment. Do not talk about things you don't know about unless you've done your research.

Okay, the simple thing that could have made Hades a better story... Persephone. She's mentioned several times but not used enough. There was an opportunity to use her character more, even as an additional antagonist to beef up the tension, but the author missed it.

Finally, the problem I have with Hades is the use of Stephanie's ability to read auras. Or, should I say the inconsistent use of Stephanie's ability to read auras? The narrative dwells on her ability when she's at work - a place where it would be least noticeable because she's used to the people there. It almost completely ignores her ability when she arrives at the resort in Greece, which doesn't make sense because that's where it would be most distracting. You really shouldn't introduce something like that if you're going to spend most the book ignoring it.

Aside from those things and some issues with punctuation/sentence structure, Hades is a fun, sweet, easy read. Definitely worth a shot, even if I probably won't bother with any of the others in the series.