I've been reading a lot of stories lately based on traditional, European tales of the Fae so Cursed Prince (Night Elves Trilogy #1) by C.N. Crawford was a jarring departure from the familiar. It's based on Norse mythology, which is an interesting take but was a bit distracting because every time High Elves or draugr were mentioned, it took me out of the story. I kept thinking, Ooh, I should play Skyrim. The writing isn't bad(!) but, um, Cursed Prince kind of reads like Skyrim fanfiction.

I mean... I love Skyrim and fanfiction so I should have enjoyed Cursed Prince more than I did. 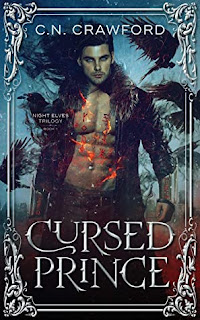 Which sounds worse than I intended. It was a quick, easy read that kept me interested. The problem isn't with what Cursed Prince has; it's with it doesn't have. Sadly, a lot.

The characters are painfully underdeveloped. The only thing we know about the female lead, Ali, is that she's an assassin (who never assassinates anyone,) with a brother (who plays next to no role in the book,) and is obsessed with awful music. (The Rick Roll thing gets old really fast.) All we know about the male lead, Marroc, is that he's kind of a vampire (but not really,) is cursed, and has a massive secret.

That really isn't a secret. At. All. The "twist" is painfully obvious, right from the start.

Cursed Prince also lacks one massively important component for a romance: ROMANCE. The feels are non-existent. Ali and Marroc go on this massive adventure together and have plenty of opportunity to develop a relationship but it just doesn't happen. (Less frustration than disappointment.) You kind of get a little inkling at the very end that there should have been something there but... nope, nothing.

The adventure is fast-paced, varied, and exciting. I can't fault any of that. I'm just saying that it should have served a purpose other than moving the characters from Point A to Point B. That's really all Cursed Prince does, unfortunately, move characters around a bit. The writing is decent enough that there's no excuse for such poor character development.

I hate just coming down hard on a novel so I want to be clear that the writing is good. Not exciting or inspiring, but good. The action is good. It's a clever idea. Cursed Prince could have really been something. As it is, it's just... okay. I have no interest in reading the next book in the series, even though this one ends at a logical place and leads well into the sequel. Worth a read? Sure. Worth a series? Not really.