Book Review: The Queen of Nothing (The Folk of the Air #3) by Holly Black ** Spoilers **

A wail of despair that ends on a hysterical sob of joy. If I could spell it, that would be my entire review for The Queen of Nothing (The Folk of the Air #3) by Holly Black. Since I can't... 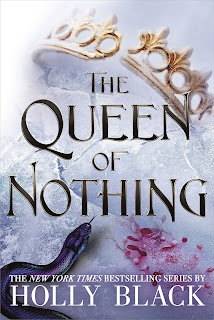 Sorry, no. What I meant to say was HOLY. FREAKING. COW.

Holly Black is the best worldbuilder I have ever read. Elfhame is so immersive and real I just want to lose myself there forever. The difference between the third book in the series and the first two is that Black introduced an element of horror that Elfhame had failed yet to deliver.

I thought the image of Queen Suren with a bridle cutting into her flesh was haunting. Then, she appeared with a stitched-on crown and scars from where the bridle had been removed. I've seen countless horror movies that failed to create an image that terrifying.

There's obviously a massively romantic element involved with The Queen of Nothing and I'm not going to pretend that Cardan and Jude aren't one of my favourite literary couples ever. The best part, though, is that it's not just a romance. Jude is a kick-ass hero who has her own story and her own goals. Her motives are complex. She has struggles and triumphs that are her own.

She just also happens to be in love with the High King.

Although Jude is beyond effing awesome, I think it's Cardan's role in the romance that interests me most, which is why I can't wait to get my hands on How the King of Elfhame Learned to Hate Stories. (Curse post-holiday poverty, amiright?) Cardan is the only character worthy of Jude. He's enigmatic and remains shrouded in a certain amount of mystery, even after pouring his heart out.

Plus, he's sexy as hell.

I simply can't say enough good things about The Folk of the Air books. Read them. Then, read them again - which is what I'm about to do.