I became a fan of Sarah J. Maas last year when a friend convinced me to read the A Court of Thorns and Roses series. After that emotional rollercoaster, I didn't think I could be more impressed with Maas's writing  - until I picked up Throne of Glass (Throne of Glass #1.) 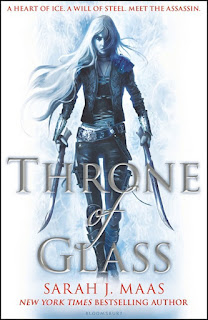 One of the things I love most about Throne of Glass is how different it is from A Court of Thorns and Roses, so much so that I had to remind myself a couple of times that I was reading the same author. Throne of Glass isn't quite as sexy as the later series and the romance definitely has a lesser role, but it's still there. The potential romances are handled so well it didn't even bother me that it's basically a love triangle (which you know I hate.) But let's put that aside for a minute.

Celaena Sardothien, the best assassin in the kingdom at just seventeen, is enslaved after being betrayed by a fellow assassin and sent to a death camp, where she continues kicking ass instead of obediently dying as expected. Prince Dorian Havilliard shows up a year later and offers her a chance at freedom: compete in a series of trials against the kingdom's deadliest men to become the king's champion. During the trial, she's watched over and trained by the prince's stern best friend, Captain Chaol Westfall. Naturally, both men fall in love with Celaena's unbreakable spirit and she goes on the face the largest, nastiest man in the competition's final battle.

There are so many reasons to love Celaena. She's a tremendous hero - strong, and snarky with just a hint of vulnerability. She likes being a girly-girl and dressing up but is just as comfortable scaling a wall with her bare hands and running until she pukes. It's nice to see a hero who shows young girls that it's okay to be both "traditionally feminine" and totally fucking bad ass.

The love interests are equally likeable as well. Dorian is cheeky and fun, while being sensitive and considerate. Chaol rides Celaena hard as her trainer but is fiercely protective and devoted. I'm probably more Team Dorian at this stage, but only because we don't know how the dynamic will change between Chaol and Celaena now that she has a place in the king's court. Celaena's story doesn't revolve around her relationship with either man, which is always a plus.

Another reason to love Throne of Glass is Maas's narrative style, which is stunningly beautiful. Her language is poetic and delicious, without being flowery, and her pacing is spot on. The story moves forward at a perfect pace, with just the right combination of action and introspection. It has a brilliant blend of combat, romance, and magic that will appeal to fantasy lovers, especially at a YA/New Adult level. Throne of Glass ended in exactly the right spot, where a sequel would feel natural, rather than forced just for the sake of a sequel, and left me screaming for more.

I'm coming into the series late, which means there are already six more books to read. I'm excited to see how this plays out but also a little worried that the romance will drag out too long without resolution, which would be frustrating. Guess I'd better get started on the next book and find out...