I have to be honest, Jungle Cruise (2021) wasn't my choice. When I saw the trailer, I thought, 'Gah. Dwayne Johnson looks ridiculous in that getup.' But, I dithered (stupid decision paralysis) so I lost the right to chose. Jay picked Jungle Cruise and I'm so glad he did. It turned out to be a super fun way to waste the evening. 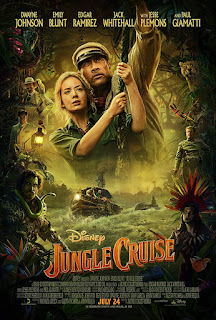 Dr. Lily Houghton (Emily Blunt) is an intelligent, wise-cracking, ass-kicking feminist determined to find the Tears of the Moon, a magical tree with healing properties that will change the face of medicine forever. Her long-suffering brother (MacGregor Houghton,) played by comedian Jack Whitehall, gets dragged along for the ride and often steals the show as only younger siblings can.

Lily and MacGregor need a guide through the Amazon and end up with the less-than-honest Frank "Skippy" Wolff (Dwayne "The Rock'" Johnson,) who has more secrets than a White House aid. He agrees to help them - with the occasional assistance from his "murder kitty," Proxima. Even though he's certain they'll be unsuccessful in their endeavour.

Cue a handful of conquistadorial zombie... ghosts... undead baddies(?) along with a heaping helping of sexual tension between Dr. Houghton and Frank Wolff, a crazy Prussian prince with a U-boat (Jesse Plemons's Prince Joachim,) and (Did I mention Dwayne Johnson in his skimpy little captain's outfit?) you've got a swashbuckling adventure the whole family can enjoy.

The cast is what makes Jungle Cruise work so well. Dwayne Johnson and Emily Blunt are both excellent separately so, putting them together was just pure magic. They're both brilliant actors who aren't afraid to have a bit of fun. Since they don't take themselves too seriously, they even sell silly roles like these. I really don't think this movie would have worked if you'd had "act-ors" trying to prove themselves, if you know what I mean.

And, of course, Jack Whitehall plays the perfect toff because... well, bless his heart, Jack Whitehall is the perfect toff. I also appreciate the inclusiveness of making MacGregor a closeted gay character in the Victorian era. (Better late to the party than never, right, Disney?) Plus, I just love how awkward Whitehall can be and his every interaction with Proxima the jaguar made me laugh.

Pretty much the moment they first showed Frank scamming customers on La Quila, I turned to Jay and said, "It's like they made this movie just so they could make a new ride at Disneyland." It felt like a movie made just to sell an attraction. Well, I guess I was kind of half right. Since I've never been to any of the parks, I can forgive myself for not knowing that Jungle Cruise has been around for... oh, a little while. (Like, 1955. Cringe.)

We both agreed, watching Jungle Cruise, that even if they had made it just to sell tickets, it would be a freaking cool ride. Can anyone weigh in? Is the attraction as good as the movie?

Okay, so if I had to rate this one (and I'm reviewing it, that's kind of the point,) I'd give it five stars BUT it's obviously not perfect. While the CGI is amazing in some places - take Proxima, for example - it's pretty shoddy in others. Certain little things like the bugs are kind of ropey, while the sweeping vistas are breath-taking. A little inconsistent. Considering Disney have the best of the best working for them, I'm not sure there's any excuse for inconsistency but, hey, it's better than I could do so who am I to judge, right?

The thing Jungle Cruise did best, in my opinion, was keep a secret. I was actually surprised by the revelation of Frank's true identity, which was a nice change. Too many movies use foreshadowing like a shovel to face. Jungle Cruise is much more subtle, just dropping enough hints to make you go, "Oh, yeah!" in hindsight. Makes it a much better experience if you don't see where it's going twenty minutes into the movie.

And, of course, there's a happily-ever-after, which we are all desperately in need of right now.

When we asked Jay's best friend, who'd seen the movie the week before us, if we should take the time to watch it, he shrugged and said, "Sure. Doesn't what it says on the tin." (That's a glowing recommendation from him, trust me.) I can't think of a better way to sell it. Jungle Cruise does what it says on the tin. You won't be disappointed.