You’ve never hidden the fact that you’re not a massive fan of the Nightmare films. With that in mind, tell me why you got behind A Nightmare on Elm Street making the top 5 list.

It’s not that I dislike the series, really. I just find WesCraven a little overrated. It’s not fair to write A Nightmare on Elm off just because I’m not his biggest fan. I did like some of Craven’s films but things like this and Scream, I wasn’t a fan of. They weren’t scary, just okay. But that doesn’t mean I don’t appreciate the fact that it was a major slasher film for you and a lot of other people.

A Nightmare on Elm Street is a much, much darker movie than you’d think at first glance. They just call Freddy Krueger a “child killer” but the original script was clear that he was a paedophile, and the remake overtly calls him a paedophile. I don’t think there are many themes darker than that. How does such a horrible character become such a beloved villain in the horror community? 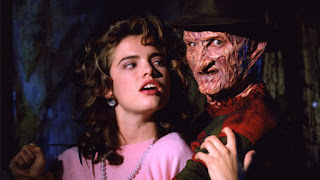 It’s kind of fucked up, isn’t it? The honest answer is, I don’t fucking know. It’s sick.

But you still love Freddy, right?

Well, luckily, they had someone like Robert Englund playing him. He’s a real personality. There was a lot of humour, too. I think without that humour, there’d be nothing redeeming about his character.

I didn’t realize until literally today that the characters were supposed to be 15 and that’s really fucked with my head because of the whole bathtub scene, mostly. I mean… sexualising a kid that young is just yucky – but fitting for a movie about a paedophile.

Hollywood has always cast much older people as high school kids. And it’s never seemed to have any problems sexualizing children and young women. It’s not right, but it’s not surprising, either.

I think the most striking thing about A Nightmare on Elm Street is how impressive it is visually. The use of shadows and angles create an eerie, twisted kind of feel. Agree or disagree?

I agree. It creates a kind of nightmare feel.

I will give Wes Craven credit for creating films that were crisp and sharp. It’s like M. Night Shyamalan. I don’t like his films, but they’re well shot. 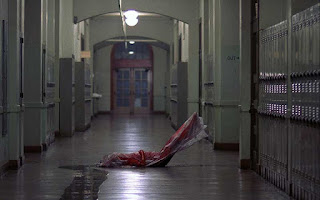 Before I get to the rest of the actors, I have to say that Robert Englund is superb as Freddy. It’s a role he just got better and better at. What did you think of his performance?

I knew Robert Englund from V, which was a great series. Funnily enough, he played a good guy in that one, so A Nightmare on Elm Street was a big change.

He really grew into the role of Freddy. Englund is quite outrageous the first time you see him. It’s like the Pink Panther in that way. Freddy was just a part in it but, by the next one, it was his film.

And now for the rest of the cast…?

John Saxon had been around for a long time and Rachel Wyss went on to do a lot of films. Heather Langenkamp hasn’t done much, which isn’t a huge shame because her acting, although it’s gotten better since A Nightmare on Elm Street, still isn’t great. Then, you’ve got Johnny Depp – Hollywood A-lister, Jonny Depp – who got the role that was supposed to be Nicholas Cage’s.

I’m really glad Depp got it and Cage didn’t.

I think most people are, lol.

The real shock is seeing Lin Shaye. It would be another twenty years before she got her time in the spotlight. 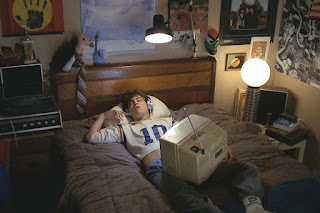 I love that she became a scream queen as an older woman.

There are some wild, gruesome, fucking weird moments in A Nightmare on Elm Street. What’s your favourite scene?

A lot of people say it’s when he runs his hands along the walls. I didn’t like that much. The thing that stuck with me was the rhyme. Psychologically, it’s worse because I’ve heard kids singing it. It really stays with you.

I think one of my favourite scenes is the end, which was so funny and nasty. What did you think of the end?

It was leaving it wide open for the sequel, wasn’t it? Which is the problem. If you get a successful horror film, you’re gonna do it to death. And Nightmare has been done to death.

I can’t say that I cared much for the reboot. What did you think of it?

I didn’t like it at all. It just didn’t work and there was no need for it. The guy was trying to be Robert Englund and that was never going to work. Plus, I’m sick to death of reboots.

Regardless of whether I loved or loathed the film, Freddy, more than any other horror character, has imprinted on culture. I think it’s because he had such a big personality. Everybody loves him. Like you said, you’ve got this really dark character that absolutely should not be idolized but you always see Freddy at conventions. What does that say about society?