I’m not going to ask you what you didn’t like about Scream because I know you don’t find Wes Craven films frightening so, instead, I want to ask if there was anything you did like.

Oh, it’s slick and it’s entertaining. As an entertaining film, yeah, definitely, it’s a good film. It’s more of a thriller for me, though.

I could point out that we had this discussion about Jaws, and you insisted that Jaws was horror. Scream’s literally got people being “sliced and diced” by a ghost-faced killer… if that doesn’t earn it horror status, I don’t know what does.

I suppose you’re right, it’s just because I don’t find it at all frightening. Like I said, it’s not that I hate the film, it’s just not my cup of tea. I watched them just to say I’d seen them. You can’t call yourself a horror aficionado if you don’t watch it all, right?

I preferred Scary Movie, a parody of Scream.

I hated the Scary Movies. They’re just all gross out humour and nothing else.

Yeah, but I love those movies. 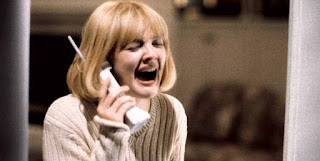 I’ve seen Scream a lot (like, a lot, a lot,) so I had the chance to watch you watching it and I noticed you roll your eyes a few times at the different references to other movies and franchises. Were there any that you thought were cute or did they all annoy you?

It was unnecessary. That was what the Screams were, a cliché. As a result, they use every trick in the book. The references were clever, I suppose. The “Wes Carpenter” one stood out.

And the Fonz’s jacket in Principal Himbry's (Henry Winkler) office? You pointed that one out straight away.

Hah. Yeah, I did like that one. It was a nice touch.

I think my favourite one was around that time. It’s when the principal runs out into the hallway and there’s a very Freddy-esque janitor there.

That was a cringe reference for me. I was just like, “What the fuck is Freddy doing there?”

Scream did beat a lot of good slashers like PromNight to make this list. Tell me why you think it deserves its spot. I just want to point out that we didn’t even argue about it. It just went straight to the list. Why?

Because of its popularity. It’s like when you go to see a comedian, just because I don’t get the joke, doesn’t mean it’s not good. It’s just preference. Scream isn’t my preference – but I know it’s yours.

It is mine. Scream was kind of a generation defining horror film. I’m not saying it’s super terrifying because it’s not. It’s a lot of fun, though. The fact that people are still dressing up as Ghostface should tell you something. 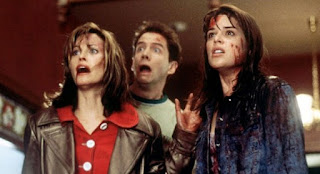 That they lack imagination?

For my generation, Scream is a who’s who. What did you think of the casting? Did you have a favourite character?

Scream really was a tour de force of its day for actors that you might not know well then but you would. I think it was the first time I was really exposed to Matthew Lillard. You can’t beat Matthew Lillard. He’s such a kook.

Anyway, it was ballsy, having Drew Barrymore in the beginning and killing her straight – the rest of the movie just didn’t live up to that intro.

That was one of the best moments in the film! I love it mostly because of the way they parodied it in Scary Movie, though.

It’s funny rewatching Scream now because of the technology. I had to laugh at the one cellphone because it was so freaking big. (We totally had one of those.) And the computer was massive as well. The technology that’s become part of our everyday lives has become so advanced in such a short time it really is incredible.

That’s the only think that dates it. Fuck me, a video store! When was the last time I saw a video store?! Ten years ago? Fifteen? And, even then, it was all DVDs.

I loved our local video stores growing up. We spent a lot of time and a lot of money there. I’m glad Scream features one for that reason. It really does sum up being a teenager at that time.

You were around for the death of the video store. I was there for the birth. It is a very generational moment. 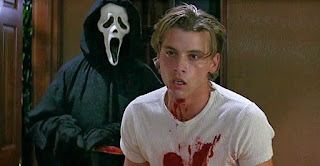 Scream is my era. It’s my teenage years. It’s as familiar as my childhood home. Like you said, you’re a different generation. What was it like for you? Does it change the viewing experience?

Of course it changes the way I see it. I didn’t go to the pictures to see Scream. I was pretty drunk through most of the mid-90s, mind. It’s one of those times that reminds me that there’s a huge age difference between our ages.

Like with any half-decent horror movie, Scream has a lot of sequels. (Maybe too many?) Were there any you liked?

No. It’s like A Nightmare on Elm Street. The first is by far the best. I haven’t seen the TV series either.

I watched the first season when it came out. It was good. Very different, but entertaining. It wasn’t so good that I just had to watch the other seasons, though.

There have been a lot of old horror movies turned into tv shows lately. I think that pretty much sums up most of them. I kind of wish they’d just stop.

We just watched the trailer for the new Scream movie. What did you think of it? You ready to be dragged to the cinema?

Sigh. I can see why it would be nostalgic for you but I’m not excited about it. Don’t give me those eyes, of course I’ll take you.

Anything you want to add?

Scream really is an entertaining film. I didn’t see that there were two killers. I’d pretty much sussed that it was Stuart, but Billy (Skeet Ulrich) seemed too obvious. Like I said, it used every cliché in the book but in a tongue-in-cheek way.