Okay I’m just gonna go ahead and say it. Satan’sLittle Helper is all kinds of fucked up. I love it and I know you do too. Tell me what drew you to this one.

It’s just one of those stupid films that gets you. There’s nothing that stands out, but the idea is original and works well. It’s funny and entertaining.

This one flew under the radar a bit. Give me a quick synopsis for people who missed it.

There’s this serial killer that’s supposed to be reformed – but he’s not. He’s out having a bit of fun on Halloween, and he happens across a kid who sees him as a character in his video game. The kid idolizes him, so the killer lets him tag along while he goes on a murdering spree.

Wanna touch on things like cinematography or production value? 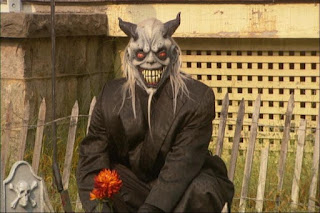 It’s quite slick and very well done. It doesn’t have a massive budget but it’s not particularly low budget, either. If the value had been any less, it wouldn’t have worked.

For me, Satan’s Little Helper was made seeing Katheryn Winnick as the older sister, Jenna Whooly. I recognized the name, but it took me a while to realize it was Lagertha from Vikings because she looked so different. In this, she’s one of the first people to realize something’s not right with the guy pretending to be her boyfriend.

The baddie – Satan Man, I think he’s called – is what makes Satan’s Little Helper for me. That mask is outstanding, and I love the silly little gestures like the thumbs ups. What did you think of him?

The mask is awesome, but the enthusiasm is better. And the fact that he keeps changing costumes at the end, but the kid is so fucking stupid that it keeps working. He didn’t fall for it once. Or twice. He fell for it three fucking times. That kid…

That freaking kid, Douglas (Alexander Brickel,) is fucking insane. Like, there has to be something clinically wrong with him insane. How does he not realize that people are actually dying? Or is he just that stupid?

You fucking hope not. He thinks it’s all make-believe. I guess up to a certain age you can see a kid not understanding the difference, but that kid was definitely old enough to know better. It makes you wonder if he was that naïve about everything and why his parents didn’t sort him out.

It was nice to see Amanda Plummer in this. I love her as an actor. What did you think of her performance as Mrs. Whooly?

She’s a brilliant character actor. So many women are judged on their looks but that’s never been Amanda Plummer. She’s always relied on her ability, rather than her looks and she’s got tremendous talent. She’s a supporting character but often steals the scene in movies like Pulp Fiction and Needful Things. She’s very believable and natural. 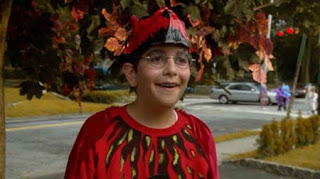 I can’t get over the way everyone thinks Satan Man is just messing around. That it’s all just a joke…

You would, though, wouldn’t you? We live in an age of internet pranks and have become so blasé about things. Your first thought would be, ‘This can’t be real,’ especially if you’ve got someone like Douglas telling you that’s exactly what it is.

Satan’s Little Helper is quite a humorous film. Even the deaths are pretty funny. Did you have any favourite moments or deaths?

There are a couple of really good death scenes, but they’re all overshadowed by Satan Man’s enthusiasm. He’s just so into it. It’s brilliant.

I think one of my favourite bits is after they leave the supermarket without paying. They’re running people down – even a baby – and the kid’s just racking up points for each one. That’s so messed up you’ve gotta laugh about it.

Part of me is like “Who the fuck came up with this movie and what drugs were they on?” The other part thinks it’s this really clever jab at all those people who insist that video games make kids violent. Which do you agree with?

There is a social commentary there, you know. People have been claiming that video games cause violence almost from the time video games were created. It’s just a way of passing the buck. You don’t want to admit you’re a crappy parent so what can you blame? Video games are an easy target because they can’t exactly fight back.

Any other thoughts on Satan’s Little Helper?

It’s one of those movies that flew under the radar. There was no advertising. I can’t remember why we watched it, but it was a great surprise. It couldn’t have had a massive budget, but it worked so well.

You have to put it down to the kid. His total hero worship of this video game character is so well played. The Satan Man plays along with so well it becomes a fucked up buddy movie.

Would you have liked a sequel?

No, I’m glad they left it at one. As good as it was, it didn’t need a sequel. It works as a stand alone movie.