When it comes to superhero movies, I have just one rule: Never heed the word of the fuckbois, for they are big of mouth and small of… mind.

As the release date for Morbius neared, critics came down hard on the film – hardly surprising since their whole job revolves around proving how much better they are than everyone else. (Kind of like Convservative MPs.) Snobbery, blah, blah, blah. Then the movie came out and all anyone could talk about was “I heard it was awful.”

But no one I talked to had even seen it.

They were basing their opinions entirely on the word of fuckbois they’d seen complaining about the movie online.

Tut tut, y’all. When will you learn?

Fuckbois had decided they hated the film before it even finished filming. Why? Because Jared Leto. Apparently some fuckbois never forgave Jared Leto for being the most original version of an abusive lunatic (ie: Joker) and not being Heath Ledger’s drooly-faced, lip-smacking abusive lunatic.

(Personally, I thought Jared Leto's Joker was the best of all – but I also thought his decision to leave was the right one and Harley’s character was much, much better when she was single. I have big opinions.) 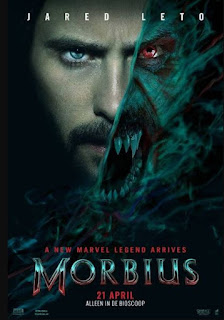 Sadly, I never got the chance to watch Morbius in the cinema because, you know, life. Now that I’ve had the chance to rent the digital version a few times, though, I gotta say it’s probably a good thing. I had reactions to this movie that were best had alone in the privacy of one’s own home.

I have a thing for vampires, you know.

For the sake of full disclosure, even though I’m a comic book hoarding geekgirl, I’ve never read the Morbius comic books. Just never got around to it. (Ask me about Howard the Duck sometime…) All I knew going into it was that Morbius was a Spider-man villain, Jared Leto has great eyes, and Venom prepared us for a new, darker MCU that I was 100% ready for.

Sometimes it’s better this way. Since I didn’t know much about the character, I didn’t spend the whole movie being annoying by little things like the fact that he drank blood with his mouth instead of his hands. (Yeah, Google it.) Not that it’s not a fun idea for a fanfic…

So, what is Morbius about? (As always, there will be spoilers.)

Michael Morbius (Jared Leto) meets his best friend and surrogate brother, Milo (Matt Smith,) at a hospital in Greece for children with a rare blood disorder. He vows to find a cure for them and devotes his life to that cause, even earning a Nobel prize along the way, while Milo devotes his life to being a spoiled little rich boy. The “cure” Michael eventually finds is more of a curse – not that it stops Milo from stealing it, then revelling in all the inhuman powers it gives him. To save himself, the woman he loves, and the people of New York, Michael has to face off against the man he always considered a brother.

I love everything about this movie. It ticks every box for me, starting with Jared Leto as a vampire. Yum. Jared Leto in a manbun. Yum. Jared Leto rockin’ some young Gary Oldman as Vlad the Impaler vibes with that little beard…

(See what I mean about it being a good thing I had to watch it at home?)

But it’s not just a movie with Sexy Vampire Jared Leto. It’s a superhero horror movie with Sexy Vampire Jared Leto. How is that not the best combination? And I don’t mean that it’s a little spooky. Marvel went full horror on this one. The vampire transformations range from quick and subtle to full-blown and terrifying, but they are always shiver-up-your-spine effective. They are bat-like. They are grotesque. They are masterful.

They’re better than anything I’ve seen in a full-fledged horror movie in a long time.

Like I said, Morbius isn’t just a horror movie. It’s also a superhero movie, which means plenty of action. The movie’s introduction is a perfection example of that. It starts with a sweeping shot of a helicopter landing on the side of a mountain – nothing you wouldn’t see in any action flick – until the explosion of bats.

It’s interesting that, with his rain… cloak? Michael looks more like a villain in his scene than a hero (or anti-hero.)

There’s never really any doubt who the villain of the piece will be, though. It’s sort of like watching an old episode of Columbo. You know who the baddie is, you’re just waiting to see how he gets had. In this case, you know from the way Milo hauls off and whoops the schoolboys outside his hospital that he’s going to be a “wrong ‘un,” you’re just waiting to see how it happens.

Morbius is a superhero action movie full of horror, but it also has plenty of romance. Martine Bancroft (Adria Arjona) is a strong Latina woman who takes zero shit from the police and earns my (and Michael’s) undying respect. There’s a sweet playfulness to their relationship that makes you root for them from the first moment they first appear onscreen together.

My only criticism of the film, however, comes from the relationship between Martine and Michael. Number one pet peeve in films? When a woman dies to further the storyline of a male character. When I realized Martine was going to die, the first words out of my mouth were, “Aw, hell no. They did not kill her just to give him a reason to fight. I will turn this shit off right now.”

(And, yes, I can turn on a movie that quickly.)

So, when Martine bites Michael’s lip and I realized she was looking after number one, I literally cheered. That’s what the film industry has been missing.

(As long as they don’t use this as an excuse to turn her character into a villain that Morbius has to kill later, because that shit’s not okay either.)

Story aside, I can’t wrap up this review without talking – okay, gushing – about the imagery in Morbius. It’s just stunning. I love the overall mist against neon look that gives it both a gritty urban and mystical feel at the same time. This is especially effective later in the film when Morbius is “flying” through the city. It’s the perfect representation of Morbius himself: the scientist who used science to turn himself into a mythical beast.

(And it’s great that no one ever shies away from calling him a vampire. It makes for some great vampire puns.)

The neon lights on the rooftops are also a nice touch, especially during the scene I mentioned before with Martine’s “death.” The small, square skylights lit up from beneath in green and red in a grid resembling a Rubik Cube, which you see with Michael throughout the film – and isn’t symbolism fun?

Speaking of symbolism… the way they keep going back to the stopwatch is such a powerful move. Obviously, Michael is obsessed with his own demise because his rare blood condition is a death sentence that he should have already succumbed to. It really speaks to the human fascination with the vampire mythos and the deeper meaning behind that.

We’re all obsessed with immortality, with counting down our days. Morbius subtly resets his stopwatch, counting down the minutes until he turns into the monster he fears, and reminding us of the cost of our obsession with youth.

But back to the imagery… Let’s talk about bats. (Literally any time.) Bats streaming from the cave at the beginning, bats in their “fishbowl” in Michael’s lab, bats in the sewers when they come to his aid, etc. I think my favourite use of the bats is when they lift the weakened Morbius to his feet during the final fight with Milo. There’s just something beautifully poetic about the movement, like a kind of ballet dance.

But it’s not all action, adventure, and exsanguination. (“I looked it up.”) The story deserves a deeper look too. As someone who suffers from chronic illness, I really feel the way Milo casually dismisses his pain as an “11” when asked how it is on a scale of 1-10. Chronic illness plays such an important part to the development of both Milo and Michael’s stories.

Can we really blame Milo for enjoying the first pain-free days in his life? Wouldn’t you fight anyone who threatened to take that away? (Of course, there’s the social aspect as well… maybe if Milo hadn’t been the entitled, hedonistic, white brat he was as a human, he wouldn’t have become the monster he was as a vampire, but that’s a discussion for another bottle of bourbon…)

And how can we really appreciate Michael’s battle against the bloodlust unless we also understand that not giving into it means giving in to the illness that will kill him? Not just kill him but cripple him in increasing amounts of pain along the way. He’s not just fighting the monster within him; he’s fighting the chronic illness within him – and one of them has to win.

I don’t think there’s any doubt at this point that I enjoyed Morbius. Like I said, I have a thing for vampires. Despite what the critics and the fuckbois say, this is what Jay would call a “top tier” film for me. In fact, Morbius is easily my favourite MCU film. This is the one to beat.