I love writing microfiction because trying to fit an entire story into exactly one hundred words is a great challenge. (And yeah… a lot of times my verbose ass can’t do it and I end up with a much longer story. That’s okay too.) I love reading microfiction because it gives you a quick glance at someone’s writing style without having to devote too much of your time to something you might end up disliking. 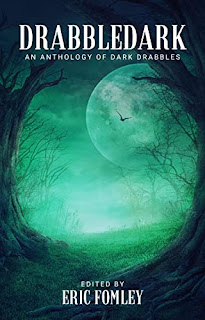 When it comes time to review an anthology, you can’t exactly say, “I didn’t like this book because I didn’t love every story in it.” I mean... you could, but you’d be a massive dick.

(Seriously. Don’t do that shit.)

Did I love every story in Drabbledark? Of course not. I didn’t like the flow of some or the tone of others – but that’s fine. It just means those ones weren't for me. Besides, they’re only a hundred words each. These stories go super quickly and you read a lot more that you like than you don’t.

My top 5 stories from Drabbledark are:

It's refreshing to have a Persephone retelling that isn't romantic.

Wow, it's not easy to squeeze a surprise ending into  a drabble, but Winters nails it.

4. “Next Time Look in the Cabbage Patch,” John H. Dromey

Should be silly, but 100% is a childhood nightmare come to life.

Yes! Two of my favourite things: a sassy mama bear and the fae.

The stories in Drabbledark cover a range of motifs, from deep sea to deep space – and just about every nasty niche in between. This can be a good thing because it offers a little something for everyone, appealing to a wider range of readers.

As a reader, I prefer an anthology when it’s a little more focused than that. ("Dark" is a very broad category.) The constant jump from one theme to the next is a little jarring for me. It seems unfair to lower a book's rating based on personal preference rather than any faults with the book itself, especially when there isn't really anything to complain about as such, but it does bug me a bit. That being said, this anthology was still enjoyable light reading - so much so that I could have done with Drabbledark being twice as long.