Book Review: If This Gets Out by Sophie Gonzales and Cale Dietrich

I don’t know why If This Gets Out by Sophie Gonzales and Cale Dietrich came up on my Recommend For You list on Kindle since most of what I’ve read lately has included sexy fae (or shifters or vampires,) but it did and the tagline got my attention: Ruben and Zach are in the world's biggest boy band. They’re also secretly in love.

As a diehard Joshler shipper, there was no way I could scroll past that one!

And you know what? If This Gets Out delivers. It's like picking up a really great piece of fanfiction. (And of course it makes me think of certain bands...)

There’s a lot more going on in If This Gets Out than a couple of pretty boys falling in love. (Though there’s plenty of that.) It takes a hard look at the toxicity of the record industry, exposes narcissistic parents, shares the struggles of drug addiction, and begs superfans to maybe tone it down a bit. 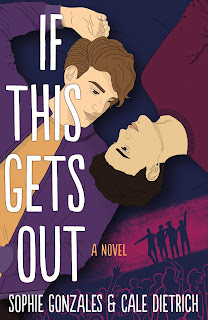 When you’re dealing with a cast of characters as large as this one, it can be too easy to get voices mixed up or fail to separate them at all. We’ve all read books where the characters all “sound” the same, right? You don’t get that problem with If This Gets Out. Each character has their own unique, consistent identities, as well as their own goals, talents, and struggles. Even very minor characters, such as security guards, are so well developed that you care about what happens to them.

If This Gets Out excels at character development but also the interaction between characters. The reason for that is the novel’s co-authors, who each took charge of one of the main characters. The back and forth between Ruben (Gonzales) and Zach (Dietrich) as the novel progresses gives you a view into two very different worlds: the gay boy who’s tired of being locked in the closet by the band’s label and his best friend who’s just starting to understand his own sexuality.

It’s just the most adorable, heart-warming thing ever.

The novel teases at sexual situations but isn’t too graphic, which makes it appropriate for a wide range of ages. The blossoming relationship between Ruben and Zach is well-paced, with just the right amount of steamy mixed with sweetness. They go through struggles – individually, as a couple and as a band – but you’re with them the whole way. You’re rooting for these kids, hoping they get their happily-ever-after.

Reading If This Gets Out felt like a totally indulgent, guilty pleasure and I loved every minute of it. It had me grinning from the start, blushing a bit, tearing up a little, and beaming at the end. Whether you’re a fan of fanfiction or just of boybands, this one should give you the fix you need.