Diet Riot: A Fatterpunk Anthology, edited by Nico Bell and Sonora Taylor, is one of the anthologies I was hoping to submit to but couldn't get around to finishing anything for. Now that I've had a chance to read it, I'm even more gutted that I didn't get the chance to be part of it because this anthology freaking rocks.

I love the overall tone of Diet Riot. Although every author has their own voice and vision, with varying styles and abilities, there's an underlying sense of positivity that runs through the anthology. It isn't just about body positivity, which the book achieves by putting fat characters in the protagonist's role (something we just don't get enough of... well, anywhere,) but also inclusivity and feminism - sometimes in subtle, quieter ways, and sometimes in loud, in-your-face ways. 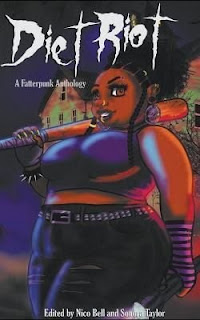 The stories I liked best were the latter of the two. I loved the attitude and the snark of stories like "Blue Hair" by Marsheila Rockwell (which features a witch who turns her girlfriends into cats,) "Like a Thief in the Night" by Kay Hanifen (in which the old grey man goes to Hell where he belongs,) and "The Floor is Lava" by Nikki R. Leigh (which has freaking alien lava cryptids vs. a roller derby team.) These were my favourite stories, although I enjoyed nearly all of them.

Making fat characters the main focus of the anthology opened the editors up to the expected amount of  abuse online... because the trolls just never stop, do they? I'm grateful to the editors for taking the chance, though, because Diet Riot offers a neglected demographic something to identify with. The anthology gives us witty, strong, likeable, relatable characters who (for a change,) look like us.

Sure is nice to have a fat character in horror who isn't either the funny sidekick or the creep who dies first.

I got a real kick out of Diet Riot: A Fatterpunk Anthology. It was fun, fast-paced, and entertaining. There were enough lake monsters, evil doctors, ghosts, and demons to please any horror fan - without the hardcore (sometimes unnecessary) gore and hatred of women that sometimes spoils the genre for me.

Yeah, I know... I'm a horror author. Doesn't mean I have to like the way everyone else does it. I'm more on the horror lite end of the spectrum than the splatterpunk end, which makes Diet Riot a perfect fit for me.

Diet Riot is everything I could have asked for in a "fatterpunk" (Did I mention how much I love this word?) anthology - except about twelve more stories. I was having so much fun I was sorry to finish the book. Maybe the editors will grace us with a sequel?