Book Review: The Sylvan and the Sand (The Book of All Things #2) by Sarah M. Cradit

They say you should never trust a book by its cover. That’s advice I’ve never been particularly good at taking – especially when it comes to books with covers by artists like Melissa Stevens and Merilliza Chan. Show me s book with cover art by either of these illustrators and I’m sold before I’ve read a word.

I love the soft, high fantasy look Stevens created for The Sylvan and the Sand (The Book of All Things: Book 2) by Sarah M. Cradit. (The illustrations throughout the books are a nice bonus.) It fits the tone of the story perfectly, romantic and enchanting.

When I started reading The Sylvan and the Sand, I didn’t realize it was part of a series – not that it’s an issue. The book stands alone very well, although the enormous cast of characters does take a little while to get to know. I struggled a little bit at the beginning to remember who was who but, as they were divided up very quickly, it became a lot easier to follow. 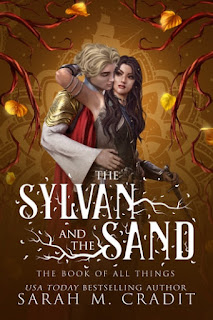 Yesenia Warwick and Corin Quinlanden are complete opposites from warring families – which doesn’t stop King Khain Rhiagain from arranging a marriage between them. Them… and all the children of the lords who swear fealty to him. As he blindsides the ruling families of his realm by pairing off their heirs, the king creates havoc, personally and politically.

Yesenia and Corin seem to have it easy as the story starts. She’s just her father’s daughter, after all, and Corin is his father’s second son. Neither are of particular importance (from a strategic point of view,) but they still manage to turn the whole plan on its head.

And even incite a revolution.

Which is what makes it fun, of course!

Both Yesenia (‘Sen’) and Corin are strong, driven characters that just get better as they grow into their forced marriage and changing societal roles. Yesenia is an inspiring, tough, experienced character while her counterpart, Corin, is cowed, abused, and inexperienced. She brings him out of himself, and he makes her a more patient, more tolerant person. They’re perfect for each other.

The character development in The Sylvan and the Sand is top-notch, which is more impressive when you consider how many there are to keep track of. All of the important characters have their own identities, personalities, and goals. They’re important to the story, not just background noise. I’m actually looking forward to checking out the other books in the series to see who’s involved in which books. There are definitely people I’m hoping to see again.

Cradit doesn’t just excel at character development; she is a master of imagery. Her descriptions – not just of places, but especially the way she handles action – have a way of putting you right in the moment that allows you to lose yourself in the story. I don’t think I got a single thing finished once I started The Sylvan and the Sand. (And I'm not one bit sorry.)

The Sylvan and the Sand might be set in a fantasy world, but many of the lessons it teaches are universal. Some of the lessons that stand out are love (the fear of both having and losing it,) coping with abusive family members, and the burdens of womanhood. I found myself nodding frequently, silently agreeing with some characters – and silently raging at others.

Even the hateful characters were fully developed, which didn't make them any less hateful.

Sen and Corin’s happily-ever-after is hard-won, which makes it all the better. Another thing that makes The Sylvan and the Sand a satisfying read, though, is that it’s not just about their relationship. Both have their own goals when the book starts out and those goals remain central for much of the story. They just happen to fall in love along the way.

And isn't that always the way?

I absolutely loved The Sylvan and the Sand. It was engaging, well-written, entertaining, and came through with the warm fuzzies at the end. This is one of those books I’m glad I judged by its cover.