Celebrations will be taking place across the globe, as they always do, to celebrate World Dracula Day on Thursday the 26th of May. This year marks a special anniversary, 125 years since the first publication of Bram Stoker's classic novel. To mark the occasion, a Guinness World Records™ attempt for the Largest Gathering of People Dressed as Vampires will be taking place at (Where else?) Whitby Abbey. If you can attend, I encourage you to go--but pay attention to the dress code, which is strict. It promises to be a fangtastic, fun-filled day.

Sadly, we won't be able to join the festivities. We have a doggo who is too badly poorly to be left alone for the 5+ hr trek each way to Whitby. But, even though we're going to be stuck at home, we're determined to celebrate as much as we can. We've been inspired by our friends at local oddities museum and curiosity shop, Morbitorium, who are hosting Vampire Week, with discounts for customers in fancy dress, special vampire-themed displays, and even mummified & staked hearts for sale! Be sure to stop by this week if you're in the area.

We'll be celebrating our own version of Vampire Week here at Castle Vanian. (Aren't most weeks vampire weeks at Castle Vanian?) Our celebrations will include the usual: music, movies, TV shows, books--and undoubtedly several arguments over the best on-screen vampire (Gary Oldman, obviously.) Not even playing... Couples have divorced over less. Hell, people have been murdered over less. 😉 We take our vampires very seriously at Castle Vanian. So, you know, stick around for the bloodshed. 🧛 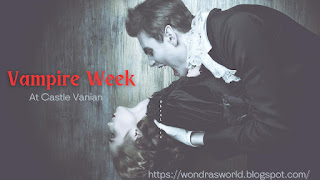 🦇 A World of Night