I haven't posted in a very long time because I've been having some problems at home. Jay and I have been slowly working things out over the last few days, thankfully, and that just hasn't left me with any time or inclination to be around online much. You guys know I love you but I love Jay much, much more. Thanks to everyone who offered their support this last weekend. :)

Things are about to pick up for NaNoWriMo. I'm excited but also a bit scared. Our first meetup is this weekend. I hope someone shows up! Katie's challenged me to a NaNo duel with crafty prizes hanging in the balance. You know it's on...

We had a blast at Club last night. (I don't know why I have to call it Club when we're actually Twmbarlywm Writer's Guild... I guess it's left over from my old Club days). Bernard challenged us with lateral thinking puzzles that totally kicked my ass. Wally beat me at every one. But I kicked his ass at hangman so I take solace in that. (Okay, yeah, we're suppose to be writing but you've gotta have some fun, right!?)

Jay's home tonight! Yay! I'm so excited. (I'll be doing my hair and make-up and everything at work before I leave today, that'll be funny. Lol.) We'll have a few extra hours together and that means a lot.

He was so cute last night. He kept coming upstairs and waking me up. "Babe...I can't find my Battle for Middle Earth cd...." Lol. Then, he came back up because he still couldn't find it so I had to go downstairs and get it for him. Then, he came back upstairs "I'm sorry to bother you again!" because the dvd drive appeared to have disappeared. (It didn't, I was hacking into a game the other day and just forgot to turn everything back on.) So I had to go downstairs and fix everything up so he could play his game again. It was like, "Wondra Vanian, 24 Hour Tech Support." Lol. (Fair enough though...Since I moved his game and messed around with the computer. Lol.)

Anyway, Jay came upstairs last night and he was saying that he loves cuddling into me and things like that and instead of listening to how much he cares, I was thinking about how annoyed I was that he didn't come to bed until almost seven am. And that's partly why we have problems. I need to stop that accusatory way of thinking and listen to the LOVE. And then I'll be a better person and a better wife. I love you, Jay.

Btw, I lost two pounds last week. Horrah for me.
Posted by Wondra at 15:06 No comments:

Personal goal for the week: To be a joy to be around. For my husband's sake. To
put him first and make him happy. To stop being so messed up in the head that it
affects our relationship. TO BE A GOOD WIFE.

Wow. Jay has been everything I've needed the last few days. It's been amazing. He's been open and easy to talk to and fun. We ordered a Chinese last night and organised our DVDs and do you know, I enjoyed myself. :)

I got both my Halloween package and a package from one of my penpals yesterday. :) Fun stuff!

Nanowrimo is fast approaching! I'm excited!
Posted by Wondra at 15:10 No comments:

October is finally here and it's already going too fast! Only 27 days until I turn 23. (Old lady!) Here's a little funny for you. I found it on the door to the girl's bathroom at work: 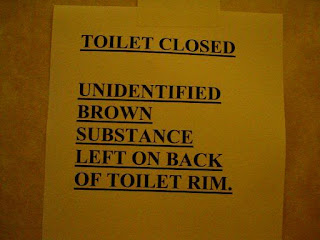 My Autopsy Baby finally arrived on Friday! :) It's SO PRECIOUS. (It sickened Sue. Lol.) Even Jay's been having fun with it. 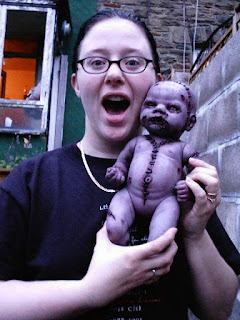 Jay and I had a fabulous convention weekend.

We're getting a new car! :) It's a Cavalier and it's white and the CD player actually works. Wahey! It's too bad we have to scrap our old car but she was getting way too unreliable. We should be picking our new car up either tonight or tomorrow!
Posted by Wondra at 15:28 No comments:

We got our new car! It's a white Cavilier and it's a bit of a chavmobile. The guy who owned it previously put racing stripes on it and a huge exhaust. It even had the fuzzy dice. But, the windows work (FINALLY) and there's a handle on the sunroof and the CD PLAYER WORKS. Wahoo! :)
Posted by Wondra at 15:23 No comments: