I don't read much straight-up romance because, as you know, I prefer my love... bitey. After the disappointment of Just Friends, I don't see me rushing to change that any time soon.

The writing is decent but the novel is dotted with minor typos & grammatical errors and the tenses get muddled in places. There's also the whole text message thing, which isn't formatted very well so can be difficult to decipher. Oh, and Just Friends is in the obligatory YA first-person. 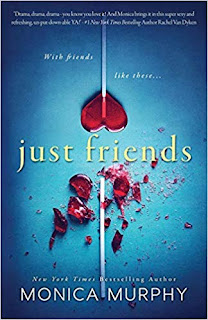 I can ignore a lot of these faults if the story is good. It isn't. Just Friends goes around in circles so much I found myself wishing for a Dramamine. And, after all that, it stops without ever reaching a resolution. The ending is abrupt and leaves readers unsatisfied.

All these things aside, Just Friends is a seriously problematic novel. The messages it sends impressionable young people are flawed and dangerous. Here are a few things Just Friends suggests are real/okay that absolutely are not:

2. He's... persistent, but that's okay. I'm glad he wouldn't let me leave.
No means no! Don't teach girls to think they are supposed to like it when boys force them to do things.

3. He fingered me and I instantly got off.
I'm sorry... what? Honey, no teenage virgin climaxes every fucking time a clumsy teenage boy touches her special place. That shit's not realistic in the slightest.

Just Friends seems to quietly condone (if not glorify) being in unhealthy and/or abusive relationships. Worse, the main character, Olivia, just doesn't learn. People treat her like shit and she just keeps coming back for more. That's not the kind of hero I'd want my daughters idolizing.

Here's the thing... a YA book that deals maturely with sex and sexual topics is NOT THE SAME as a YA book that's ONLY about sex - a lesson the author of Just Friends does not appear to have learned. The only good thing I have to say about this one is that the language does, at least, sound realistic.
Posted by Wondra at 14:34 No comments:

Ignite by Kaitlyn Davis (and now available free for the Kindle) is  the first in a series of books that follow Kira, a normal teenage girl who learns she’s anything but normal. Kira is a vampire hunter with magical abilities - and not just any vampire hunter... she’s a hybrid that should never have existed with super-duper, extra special magical abilities.

Oh, and she’s in love with a vampire (Tristan.)

These days, any YA novel not written in first person gets instant points from me. Calling out and rejecting a love triangle? Bonus points. It starts to lose points, though, when the influences of popular books/television like Twilight and Buffy the Vampire Slayer become glaringly obvious. 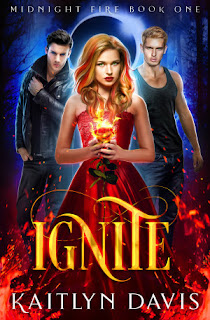 And, let’s face it, the technical ability is just not there with this one. Poor grammar and cringe-worthy typos nearly ruined an otherwise decent reading experience. The right editor could have taken Ignite from so-so to spectacular. Sadly, however, they did not.

One of the things that annoyed me most about this book was Kira’s constant crying. That’s pretty much every YA book lately, though, right? Gods, I’m sick to death of tearful teens. Don’t know about you, but I spent most of my teen years pissed the fuck off, not sobbing. Just saying...

An annoyance unique to Ignite is Kira’s seeming omniscience. She knew this, she new that, she knew... EVERYTHING, apparently, though the narrative never explains exactly how. Kira knows Luke (her immediate BFF) for less than a week but perfectly understands his every facial twitch. Sorry, but I’m gonna have to call bullshit on that one. I’ve been married for over 15 years and I still don’t know what that dude’s thinking half the time.

It sounds like I’m coming down hard on Ignite but, honestly, I enjoyed it. I’ll always, always, always fall for the we-can-never-be-together, forbidden love affair. Did I enjoy Ignite enough to bother with any other books in the series? ‘Fraid not. It just didn’t sell the romance enough to keep me coming back.
Posted by Wondra at 11:09 No comments:

The Final Wish (2018) is a modern retelling of The Monkey's Paw that falls painfully short of realizing the story's horrific nature. Visually, the film can't be faulted. It's grim and gloomy, with a Midwestern gothic feel that sets the scene for what should have been a tremendously spooky film. I mean... come on! It's The freaking Monkey's Paw. How can you ruin that?

Well, you start by avoiding backstory, follow up with as many cliches as you can possibly fit into one script, then wrap things up with cringe-worthy delivery from 90% of the cast.

Hey, did I mention that The Final Wish was brought to you by the same people who did The Final Destination?


Here's what we know about the lead, Aaron (Michael Welch), when the movie starts:

1. He's a bad lawyer. Because... well, if the failed interview he attends is anything to go by, for no other reason than he didn't attend an Ivy League school. Yeah... okay... except not every employed lawyer comes from one of the nation's best schools.

2. He's "ugly." Or is he? If Aaron is supposed to be "ugly," they should have tried harder. Giving him a cleft palate scar and calling that ugly succeeds only in being offensive, while failing to make him unattractive in any way.

3. He left home for reasons unknown. Don't get me wrong, y'all, I get it. Small town life sucks. I ran 4,000 miles away from mine so I can't exactly fault anyone who wants to do the same. On the other hand, I could list at least twenty reasons right now for why I left. Want to know how many reasons The Final Wish gives us for Aaron's departure?

Nope. Nada. Viewers have no idea what Aaron's hometown is like or why he leaves. Boy, are his parents (and everyone he used to know, apparently) peeved about it! Why? Oh, who the fuck knows? Isn't it enough to know that everyone is mad at him and his mother has inconsistent feelings about his leaving home? No? Oh, shit...

I'm usually a massive fan of Lin Shaye (Aaron's mother, Kate) but I have no idea what this performance was supposed to be. She blows hot and cold through the whole movie without any explanation, wanting Aaron to leave one moment, then stay longer the next. her character is just hateful. The scenes in which she goes full-blown crazy are deeply unsettling, though, thanks to straight-on camera angles. That's about the best I can say for her performance in this film.

I hesitate to even mention Melissa Bolona's performance as Aaron's former girlfriend, Lisa... Tell you what, imagine a love-child between Keanu Reeves's Jonathan Harker and Kristen Stewart's Bella Swan and you know everything you need to know about Bolona's performance.

Acting aside, there are so many unanswered questions about Bolona's character. For instance, why does she have such a close relationship with Aaron's family if their breakup was so horrible? (Hey, why did they break up?) Lisa feels less like a person and more like a prop. She's put here to cause conflict, there to suggest romance, and there for the in-no-way-climactic climax.

Her character isn't alone in this. The actors in The Final Wish only exist when they're needed. In fact, everything in the movie has been clumsily put there to fill an existing purpose. We need to get this creepy old urn into the story... how do we do that? Boom, his dad's an antique dealer. We need someone to die... Boom, neighbour guy is standing in their yard in the middle of the night for no damned reason. Cue freak storm.

The Final Wish is subtle as a sledge hammer which, in itself, is bad enough - but it's inconsistent at the same time. Aaron's mom is supposedly going through tough times. Obviously, I mean... just look at the shocking state of that farmhouse! Except, well, yeah it is like a mansion on the inside and totally immaculate but I'm sure the viewers will be too dumb to notice that, right?

(And if anyone can tell me why the djinn's first victim is in the most run-down mental facility since Victorian England, please let me know.) 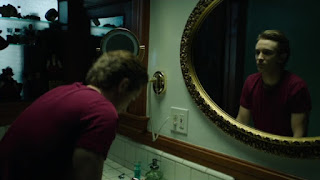 I'm still trying to figure out how a movie made by the creators of The Final Destination could be filled wish such forced, unimaginative deaths - but that's not even what pissed me off about the ending. Yeah, The Final Wish feels much longer than its 95 minutes. It's both tired and tiresome. That sucks. But what really ruins the movie for me is the way it fucks with its own rules.

If you give characters in a horror movie a set of rules, you'd damned well better stick to them yourself. You can't just go "Oh, the djinn wins anyway because it looks cool." Fuck you for even trying that shit.

Oh, and by the way... the wishing-it-hadn't-happened thing worked so much better in Wishmaster.
Posted by Wondra at 08:59 No comments: